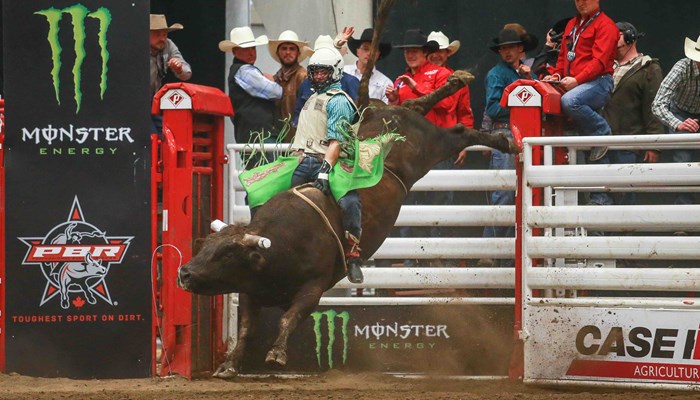 PBR Monster Energy Tour kicks off in Calgary for 2018

The MET features Canada’s elite, alongside some of the league’s top international athletes, squaring off against the rankest bucking bulls from both Canada and the United States. Fans will witness exhilarating 8-second rides and wrecks throughout the action-packed event as the PBR’s courageous riders face off against their 2,000-pound opponents.

Missouri’s Brady Sims won the inaugural event in 2016, delivering an 86.5-point ride on Shot of Whiskey in Round 1 and an 89-point trip aboard Heaven’s Basement in Round 2. Saskatchewan’s Cody Coverchuk, who concluded the 2017 season ranked No. 5 in the Canadian standings, finished fifth, while No.8 Jared Parsonage finished sixth.

Last season, the home-province hopefuls were two of the top contenders for the 2017 PBR Canada title, creating one of the tightest races for the championship in league history.

After Radford won Round 1 of the PBR Canada Finals, further extending his lead atop the national standings, Lambert made a come-from-behind surge on the final day to surpass Radford by 645.84 points, claiming his second PBR Canada title. Lambert, also the 2013 PBR Canada Champion, is just the second rider in history, alongside three-time champion Aaron Roy, to hold multiple national titles.

The bull riding action begins at 7:00 p.m. MT on Saturday, March 24. All riders will attempt one bull each in Round 1. The Top 10 will then advance to the Championship Round for one more ride and a chance at the $20,000 available in prize money. In addition to competing for points towards the Canadian National Standings, riders will also have the opportunity to earn world points in an effort to earn a berth onto the elite 25th PBR: Unleash The Beast series.

The Calgary event will mark the first stop of the 2018 Monster Energy Tour, with the complete schedule of events to be announced in the coming days.