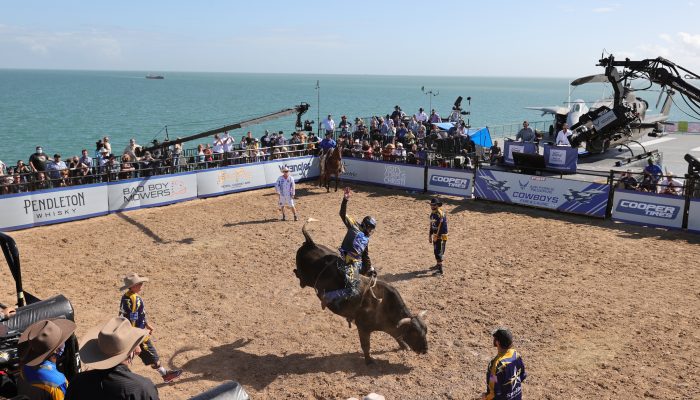 $250,000 Donated to Military Charities to Launch League’s Charitable Program, “PBR Cowboys For a Cause”

Corpus Christi, Texas (November 21, 2020) – To cap a year in which PBR (Professional Bull Riders) blazed a trail for the return of live sports following the COVID-19 (coronavirus) shutdown, the world’s leading Western sports organization made history today in bucking bulls on the flight deck of the USS Lexington Museum, a legendary WWII aircraft carrier, docked in Corpus Christi Bay.

The PBR Air Force Reserve Cowboys for a Cause 2020 launched a new PBR charitable program, “Cowboys For a Cause,” by raising money for military charities through a 15-man competition to close the 2020 season. The special team tournament raised $250,000 for Operation Homefront and other military charities with support of league partners including Ford, Wrangler, Pendleton Whisky, Bad Boy Mowers, and South Point Hotel & Casino.

The competition aboard the ship matched the magnitude of the event, as the world’s top riders put together eight qualified rides in 15 outs. For each qualified ride, Ford pledged $25,000 to their seven Proud to Honor charities, for a total of $200,000. Additionally, $25,000 was donated to Operation Homefront by Wrangler on behalf of the victorious Team Bad Boy Mowers and $25,000 from Bad Boy Mowers to Operation Homefront.

PBR constructed a bull riding arena on the 872-foot long launch deck on top of the famed aircraft carrier known as “The Blue Ghost,” bringing in 300 tons of dirt and steel and more than 15 miles of copper and fiber optic cables to support the event and television broadcast.

“PBR may have done incredible things in leading sports back to competition during a very challenging year, but none of it is possible without the sacrifice and service of our military,” said PBR CEO and Commissioner Sean Gleason. “It’s appropriate to end the 2020 season on a note of awe and gratitude – on top of an aircraft carrier symbolizing the sacrifices of freedom while supporting military charities. I want to thank our partners who made this unforgettable event possible, our fans for sticking with us all year long, our cowboys and stock contractors for putting on a great show, and most of all, the heroic men and women selflessly serving our country so we can do what we love.”

PBR is the world’s premier bull riding organization. More than 700 bull riders compete in more than 200 events annually across the televised PBR Unleash the Beast Tour (UTB), which features the top 35 bull riders in the world; the PBR Pendleton Whisky Velocity Tour (PWVT); the PBR Touring Pro Division (TPD); and the PBR’s international circuits in Australia, Brazil, Canada and Mexico. PBR’s digital assets include RidePass, which is home to Western sports. PBR is a subsidiary of IMG, a global leader in sports, fashion, events and media. For more information, visit PBR.com, or follow on Facebook at Facebook.com/PBR, Twitter at Twitter.com/PBR, and YouTube at YouTube.com/PBR.

About the USS Lexington Museum

The USS Lexington, nicknamed “The Blue Ghost,” is an Essex-class aircraft carrier built during World War II for the United States Navy. Commissioned in 1943, she set more records than any other Essex Class carrier in the history of naval aviation. The ship was the Navy’s longest-serving working carrier when decommissioned in 1991. During World War II, as part of the Fifth Fleet, the carrier participated in nearly every major operation in the Pacific Theater, spending 21 months in combat. Her planes destroyed 372 enemy aircraft in the air, and 475 more on the ground. She sank or destroyed 300,000 tons of enemy cargo and damaged an additional 600,000 tons. The ship’s guns shot down 15 planes and assisted in downing five more. The Japanese had reported LEXINGTON sunk no less than four times. Yet, each time she returned to fight again, leading the propagandist Tokyo Rose to nickname her “The Blue Ghost.” The name is a tribute to the ship and the crew and air groups serving aboard her. After the war, LEXINGTON was briefly decommissioned (1947-1955). When reactivated, she operated primarily with the Seventh Fleet out of San Diego, California. Although not involved in actual combat, LEXINGTON kept an offshore vigil during tensions in Formosa, Laos, and Cuba. In 1962, she sailed into Pensacola, Florida, and began training operations, eventually being officially designated CVT-16, Navy Training Carrier. Corpus Christi is now the permanent home to this national treasure.