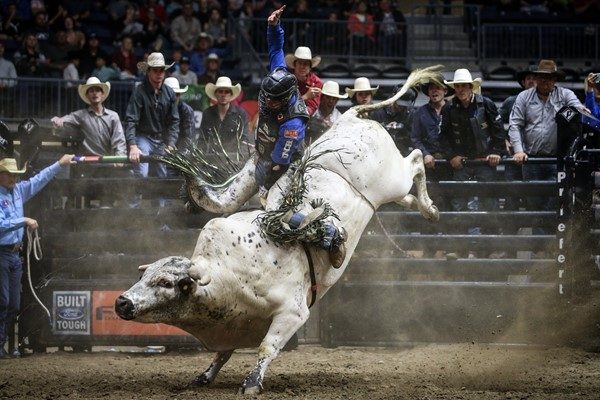 September’s Thunderbuck in the Badlands at the Canalta Centre, previously part of the Touring Pro Division, is now third stop on the elite tour’s 2020 schedule

MEDICINE HAT, Alberta – After PBR (Professional Bull Riders) Canada made its successful debut in Medicine Hat, Alberta in 2019, the “toughest sport on dirt,” will return to The Hat on Saturday, September 26, bringing fans, and viewers around the globe, even fiercer competition, with the 2020 Thunderbuck in the Badlands now part of the elite Monster Energy Tour.

Previously a Touring Pro Division (TPD) stop, the event, produced in partnership with Lorelle Halderman and Blazing Brand Marketing and Productions, at the Canalta Centre will now offer competing bull riders twice as many points towards both the national and world standings as part of the PBR Monster Energy Tour.

The PBR Monster Energy Tour regularly features Canada’s best riders alongside some of the league’s top international athletes, squaring off against the rankest bucking bulls from across the nation. Fans will witness exhilarating 8-second rides and wrecks throughout the action-packed event as the PBR’s courageous bull-riding athletes face off against their 2,000-pound opponents.

With the event once again scheduled near the end of the 2020 season, tensions will be high as riders look for coveted points used to qualify for both the PBR World Finals and PBR Canada Finals.

In 2019, the Medicine Hat event was one of a league-best five won by Saskatchewan sensation Dakota Buttar (Kindersley, Saskatchewan).

Marking just his third event on home soil that season, Buttar went a flawless 2-for-2 to surge to the victory inside the Canalta Centre and capture 320 crucial national points. While Buttar entered the event No. 12 in the nation, he surged to No. 5 courtesy of the win, moving within 1,014.16 points of then No. 1 Jared Parsonage(Maple Creek, Saskatchewan).

As the season unfurled, Buttar continued to dominate in Canada, momentarily overtaking Parsonage for the No. 1 ranking, and setting up one of the most fiercely contended national title races in league history, culminating at the Canadian Finals.

While Parsonage and Buttar entered the season-culminating PBR Canada Finals ranked No. 1 and No. 2 in the nation, within a slim 32.49 points of one another, a dominant performance by young gun Daylon Swearingen (Piffard, New York) allowed him to complete one of the most riveting come-from-behind surges in history.

After Swearingen entered the event No. 4 in the nation, he went a perfect 4-for-4 to win the Canadian Finals and erase a 689.57-point gap to emerge the 2019 PBR Canada Champion by 450.42 points over runner-up Buttar.

Thus far in 2020, the bull riding competition in Canada has remained stiff.

With four events held across all levels of competition to date, Buttar has won three, including both Monster Energy Tour events, en route to claiming the No. 1 ranking in the national standings.

The bull riding action for the Thunderbuck in the Badlands, now part of the Monster Energy Tour, begins at 7:00 p.m. MT on Saturday, September 26 at the Canalta Centre. All riders will attempt one bull each in Round 1. The Top 10 will then advance to the championship round for one more out and a chance at the event title.

Tickets for the one-day event are on sale now. They range in price from $25 to $100, standard fees apply, and can be purchased online at www.Ticketmaster.ca.