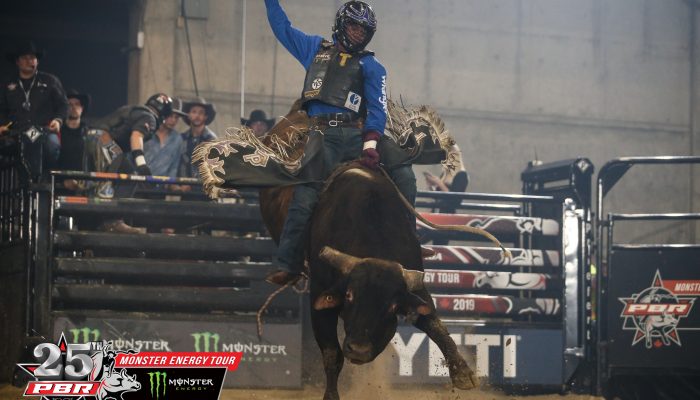 EDMONTON, Alberta – For the third consecutive season, PBR (Professional Bull Riders) Canada’s elite Monster Energy Tour will travel to Edmonton, Alberta, with the “toughest sport on dirt” set to buck into the Edmonton EXPO Centre on October 23-24, 2020 with the Command Tubular Classic.

For the 2020 Command Tubular Classic, new health and safety protocols will be instituted, including:

The 2020 edition of the event will also mark the first two-day Monster Energy Tour show in the city’s storied history with professional bull riding. For this season, the event was expanded to two days on the heels of the record-setting 2019 tour stop which included a sold-out Saturday night crowd.

After the Monster Energy Tour debuted in Edmonton in 2018, when three-time PBR Canada Aaron Roy (Yellow Grass, Saskatchewan) captured the victory, the high-adrenaline action continued when the nation’s premier series returned in 2019.

Positioned near the end of the 2019 schedule, the intense competition in Edmonton foreshadowed one of the most fiercely contended national championship races in league history.

As one of five riders to go a perfect 2-for-2, young gun Daylon Swearingen (Piffard, New York) captured his second Canadian Monster Energy Tour victory of the year inside the Edmonton EXPO Centre. Swearingen netted a crucial 460 Canadian points for the win and rose from No. 5 to No. 4 in the national standings, architecting what would be a feverish national finals.

While Jared Parsonage (Maple Creek, Saskatchewan) and Dakota Buttar (Kindersley, Saskatchewan) entered the season-culminating PBR Canada Finals ranked No. 1 and No. 2 in the nation, within a slim 32.49 points of one another, Swearingen completed one of the most riveting come-from-behind surges in history with a dominant performance.

He mounted a perfect 4-for-4 performance, winning the Canadian Finals and erasing a 689.57-point gap to emerge the 2019 PBR Canada Champion by 450.42 points over runner-up Buttar.

In addition to marking the third-consecutive PBR Canada Monster Energy Tour event in the city, the Command Tubular Classic on Oct. 23-24 will also feature the fourth-ever 5/5 Bucking Battle in the nation’s history. This special round pits the Top 5 riders from the national standings against the Top 5 bovine athletes bucking in the event, competing for additional national points and prize money. After Brock Radford (De Winton, Alberta) won the first 5/5 Bucking Battle in January in Calgary, Garrett Green (Meeting Creek, Alberta) was top cowboy in the most recent iteration of the special round in Lethbridge.

The bull riding action begins at 7:30 p.m. MT on Friday, October 23, and Saturday, October 24 at the Edmonton EXPO Centre. All riders will attempt one bull each in Round 1 on Friday, followed by the 5/5 Bucking Battle. On Saturday, after all entered riders attempt one additional bull each in Round 2, the Top 10 will advance to the championship round later that evening for one more out and a chance at the event title. In addition to competing for points towards the Canadian national standings, riders will also vie for crucial points towards the World Finals.

Tickets for the Command Tubular Classic go on sale Friday, July 24 at 10:00 a.m. MT. They range in price from $30 to $100, standard fees may apply, and can be purchased online at Ticketmaster.ca.