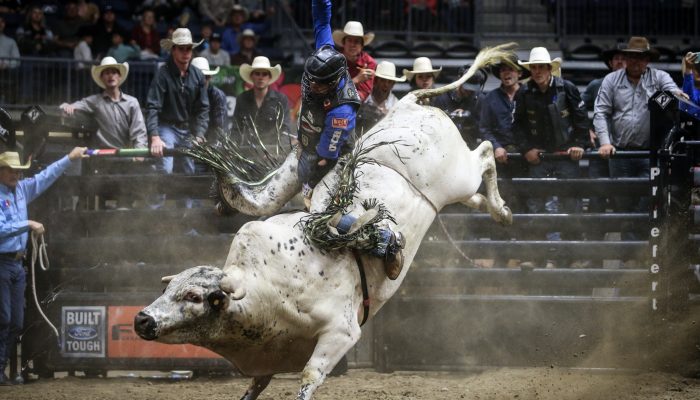 Tickets for the PBR Thunderbuck in the Badlands, presented by Robertson Implements and New Holland, on-sale now

While the league’s elite Cup Series has yet to travel to Medicine Hat, Co-op Place welcomed the PBR for the first time in 2019, hosting a stop on the developmental Touring Pro Division.

Going a perfect 2-for-2, Dakota Buttar (Kindersley, Saskatchewan) captured the inaugural event victory. After finishing second in Round 1, courtesy of an 85-point ride on Broken Trigger (Skori Bucking Bulls), Buttar clinched the win when he recorded the high-marked ride of the event, scored 88.5 points on Spooky Lukie (Two Bit Bucking Bulls) in the championship round.

Delivering one of the most consistent seasons ever on Canadian soil, four-time PBR World Finals Buttar went a torrid 18-for-25 (72%), notably covering a record-setting 11 bulls to begin the year, winning six events en route to capturing the 2020 PBR Canada Championship.

While Buttar clinched the PBR Canada Championship on the penultimate day of the season, he had to fend off a hard-charging Zane Lambert (Ponoka, Alberta). The two-time PBR Canada Champion was electric at the 2020 PBR Canada National Finals, winning one of the four events, however concluded the year runner-up to Buttar by 240.17 points.

Tickets for the event are on sale now, and start at $35, taxes and fees included, and can be purchased online at Tixx.ca, or at the Co-op Place Box Office.

In cooperation with local government and through the dual activation of the PBR’s “Be Cowboy Safe” guidelines, and Alberta Health COVID-19 rules and regulations, Co-op Place and PBR will follow all COVID-10 (coronavirus) related protocols for holding fan-attended events.

The 2021 slate of events marks the sixth season for the PBR Canada Cup Series as a unified competitive series traveling across the country and broadcast on TSN. Stay tuned to PBRCanada.com for the latest event and broadcast schedule.