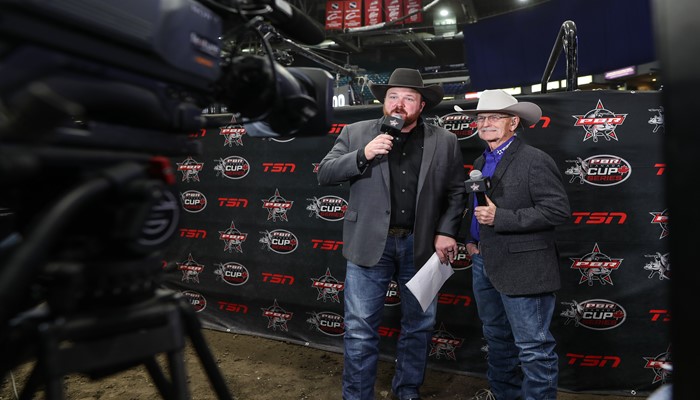 Action-packed lineup of programming to include coverage of the elite Unleash The Beast, 2022 PBR Global Cup USA, and premier Canadian Cup Series, presented by Wrangler

SASKATOON, Sask. – For the fifth consecutive year, TSN will deliver 32 weeks of PBR programming, bringing viewers highlight specials from both the elite PBR Canada Cup Series, presented by Wrangler, and world-leading PBR Unleash The Beast, along with the prestigious 2022 PBR Global Cup USA.

The current year’s lineup of events will be headlined by highlight specials for both the 2022 PBR World Finals from Fort Worth, Texas, and Dickies Arena, and the 2022 PBR Canada National Finals in Edmonton, Alberta, at Rogers Place.

“TSN has been the broadcast home of the elite PBR Canada Cup Series, presented by Wrangler, since we bucked our first bull in 2016, and their continued partnership is an integral component in our campaign to further elevate the sport of bull riding to new heights in Canada,” said Jason Davidson, PBR Canada General Manager. “The 2022 season will again feature 32 weeks of programming featuring the best bull riders in the world, attempting the rankest bulls in Canada, making PBR coverage on TSN can’t-miss weekly action for our fans.”

The 2022 lineup of programming will begin on March 23, launching five consecutive weeks of Unleash The Beast action, featuring the Top 40 bull riders in the world going head-to-head against the rankest bucking bulls on the planet. Coverage will include one-hour recaps from the tour stops in Indianapolis, Indiana; New York City, New York; Chicago, Illinois; Duluth, Georgia; and Sacramento, California.

Coverage of the PBR Canada Cup Series, presented by Wrangler, will begin on April 26, with a recap of the season-launch tour stop in Winnipeg, Manitoba.

Following a six-week run of premier series events, including a special featuring the 2022 PBR Global Cup USA on June 1 when Team Canada will compete for the tile of “Toughest Nation on Dirt,” PBR Canada Cup Series action will return to TSN on June 14.

The June 14 telecast will recap the Cup Series’ debut in Red Deer, Alberta, followed by shows covering the Brandon, Manitoba, event on June 21, and the Regina, Saskatchewan stop on June 28.

Viewers will then be brought eight consecutive weeks of Unleash The Beast programming from July 6-September 7 featuring the final regular-season tour stops of the 2022 campaign.

Coverage of the 2022 PBR World Finals will begin on August 31 with a one-hour recap from the first weekend of competition in Fort Worth, Texas, at Dickies Arena, followed by a two-hour special on September 7 documenting the final rounds of the landmark event that will crown the 2022 PBR World Champion.

On September 27, programming for the 2022 PBR Canada Cup Series, presented by Wrangler, will resume with coverage of the events in Lethbridge, Grande Prairie and Medicine Hat, Alberta, and Saskatoon, Saskatchewan.

The 2022 lineup of coverage will conclude on Nov. 15 and Nov. 22 with viewers across Canada brought all the can’t-miss-moments from the 2022 PBR Canada National Finals in Edmonton, Alberta, at Rogers Place.

Stay tuned to PBRCanada.com and TSN.ca for scheduling updates.