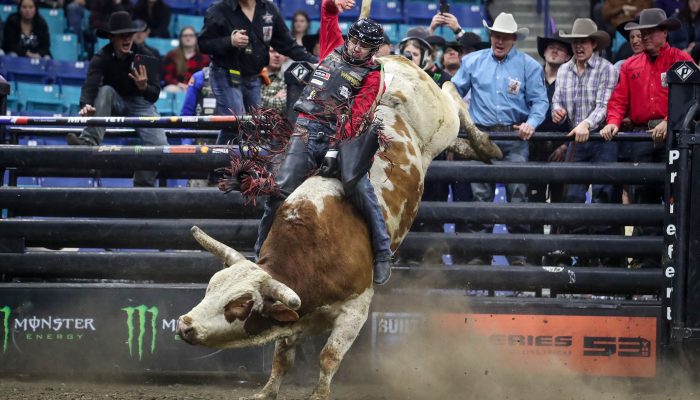 Tour set to visit 10 cities in seven provinces in fifth season, opening in Calgary for the first time

The Monster Energy Tour features Canada’s elite bull riders, alongside some of the PBR’s top international athletes, squaring off against the rankest bucking bulls in North America. Fans will witness exhilarating 8-second rides and wrecks throughout the action-packed event as the PBR’s courageous riders face off against their 2,000-pound, animal-athlete opponents.

Televised on the TSN family of channels, the Monster Energy Tour is also seen internationally via RidePass, the league’s western sports digital network.

During the 2019 campaign, the nation’s elite tour visited four of the Top 10 cities in Canada per the 2016 census. Attendance for 2019 Monster Energy Tour events increased 36% over 2018, including a sell-out in Calgary for the second consecutive season, while also drawing its first sold-out crowd in Edmonton. Additionally, the series welcomed a record-setting crowd in Saskatoon for the 2019 PBR Monster Energy Canadian Finals, which culminated one of the tightest title races in league history, with the national champion decided by the final out.

In 2020, for the first-time in series history, the Monster Energy Tour will launch the season in Calgary, Alberta. The toughest sport on dirt will buck into the Western sports mecca on January 24-25, taking over the Nutrien Western Event Centre for the third consecutive year. The Monster Energy Tour became the first ticketed event in venue history to sell-out in 2018. The now annual stop expanded to two days in 2019, again welcoming a sold-out crowd this March.

The Monster Energy Tour will then hold its second two-day event of the season in Lethbridge, Alberta on March 6-7 inside the ENMAX Centre. PBR Canada’s premier tour debuted in the city in 2019, with PBR Global Cup Team Canada rider Jared Parsonage earning his second career Monster Energy Tour win.

One week later, the nation’s premier series will make its first-ever stop in Regina, Saskatchewan on March 14.

In addition to being the first-ever Monster Energy Tour event in the city, the Regina Classic will mark the first PBR event in the city since 2011 when the developmental Touring Pro Division held two events that June. Of the two events, three-time PBR Canada Champion and Saskatchewan’s own Aaron Roy (Yellow Grass) won the final stop courtesy of a flawless 2-for-2 effort.

Following a two-month hiatus, the Monster Energy Tour will head to the nation’s eastern provinces for the fifth consecutive season.

On May 2, the series will visit Budweiser Gardens in London, Ontario for the second year, before making its debut in Sydney, Nova Scotia at Centre 200 on May 22-23. The Monster Energy Tour will then travel to the Avenir Centre in Moncton, New Brunswick on May 30.

The eastern slate of events will conclude on June 6 when the Monster Energy Tour returns to Ottawa, Ontario and the Canadian Tire Centre for the first time since 2018.

Following a four-month break, the Tour will resume in Abbotsford, British Columbia at the Abbotsford Centre on October 17. Abbotsford is the only city to have hosted a regular-season Monster Energy Tour event each of the five seasons. After British Columbia’s own Ty Pozzobon (Merritt) won the inaugural event in 2016, young gun Lonnie West won the stop in 2017, followed by Parsonage in 2018 and Garrett Green in 2019.

The regular-season will conclude at the Edmonton EXPO Centre on October 24 in Edmonton, Alberta with the Command Tubular Edmonton Classic. After the event was added to the Monster Energy Tour schedule in 2018, Canada’s lone $1 million-dollar-man in the PBR Roy won his first Canadian elite tour event during the inaugural stop in Edmonton, while Daylon Swearingen’s win in 2019 was integral in his march to the season’s national championship.

For the eleventh consecutive year, the season will culminate in Saskatoon, Saskatchewan for the PBR Canada Finals on November 13-14 where the 2020 PBR Canada Champion will be crowned.

Fans can check with PBRCanada.com for tickets to all 2020 events as well as the 2020 PBR Canada Finals at the SaskTel Centre on Nov. 13-14.