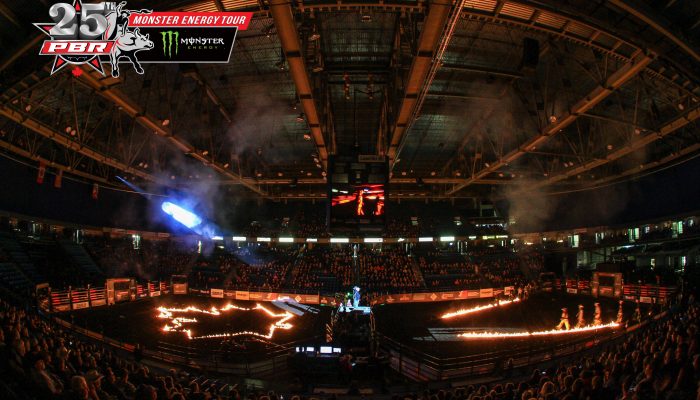 The Monster Energy Tour features Canada’s elite bull riders, alongside some of the PBR’s top international athletes, squaring off against the rankest bucking bulls in North America. Fans will witness exhilarating 8-second rides and wrecks throughout the action-packed event as the PBR’s courageous riders face off against their 2,000-pound, animal-athlete opponents.

The season will get underway on March 24 in Calgary, Alberta, marking the Monster Energy Tour’s second trip to the city since last visiting in 2016.

The following weekend, May 18-19, the Monster Energy Tour will visit Québec City, Québec and the Videotron Centre for the second-ever International Major event, which offers riders both an increased payout ($100,000 CAD) and world points (300), while featuring an added competitive flare of  international invitees from the Top 35 set to compete. In 2017, the inaugural event was won by Derek Kolbaba (Walla Walla, Washington), who ended the year ranked No. 2 in the world.

The nationally-televised tour will then travel to the Maritime Provinces for back-to-back weekends, first stopping in Halifax, Nova Scotia on May 26 followed by Moncton, New Brunswick on June 2.

When the tour visits Halifax’s Scotiabank Centre it will mark the elite Monster Energy Tour’s debut event in the city and the league’s first trip back to Nova Scotia’s capital in more than five year years. In May 2011, the Touring Pro Division hosted the Halifax Invitational won by Matt Triplett (Columbia Falls, Montana), now one of the PBR’s consistently top-ranked riders.

Marking another first, when the Monster Energy Tour bucks into Moncton Coliseum it will be PBR Canada’s inaugural event in both the city and province of New Brunswick.

After a month break, the Monster Energy Tour will travel to Kelowna, British Columbia and Prospera Place on July 7. The premier series is set to visit the city on the heels of last year’s Touring Pro Division event that attracted a near-capacity crowd. The event, won by Brock Radford (De Winton, Alberta) in the second of his historic four consecutive victories, was also the first time PBR Canada visited Kelowna.

For the ninth consecutive year, the season will culminate in Saskatoon, Saskatchewan for the PBR Canada Finals on November 23-24 where the 2018 PBR Canada Champion will be crowned.

Last season, the Monster Energy Tour featured one of the most fiercely contended races for the PBR Canada title in league history in coming down to the final outs of the 2017 PBR Canada Finals. Zane Lambert (Westbourne, Manitoba) overcame a 500-point gap in the national standings, going 1-for-2 on the last night of the season-culminating event, to earn the event title and his second PBR Canada Championship. Lambert is the only rider to win the Finals event multiple years, let alone in back-to-back seasons, having first won in 2016. He is only the second rider in PBR history to hold multiple Canadian titles.

Fans can check with PBRCanada.com for tickets to all 2018 events as well as the 2018 PBR Canada Finals at the SaskTel Centre on Nov. 23-24.