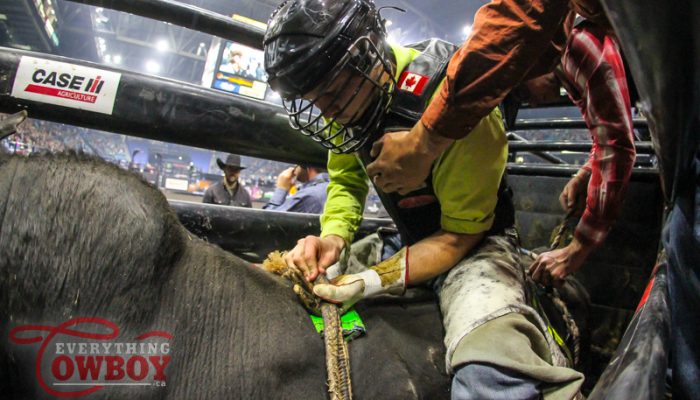 One last chance: Buttar gets spot at PBR’s BlueDef Finals

PBR released its names of qualifiers for the BlueDEF Finals, starting this Saturday, October 29th in Las Vegas, NV.

One name is really familiar if you have been paying attention to the bull riding scene in Canada in the last five years. Kindersley, Saskatchewan’s Dakota Buttar.

Buttar told Everything Cowboy at the start of the season that he wanted to put a bit more focus onto the PBR side of the sport of bull riding. He said it was all about trying something new.

Setting the goal of getting to a Built Ford Tough Series event in his first year, effectively pulling himself into the top 35 in the PBR World Standings was easily achieved for Buttar. But with an incredibly tight race to that top 35 and the Built Ford Tough Series Finals starting Wednesday in Las Vegas, Buttar found himself just a bit short in the standings. Less than 30 points short.

“I was a little disappointed in myself, to be so close and missing out on them sucks,” Buttar said. “But I made the most of it and went to the last one (Portland, Maine) and tried to get there.”

That disappointment was short lived, after a small technicality would see the PBR Canada invite drop into his lap. Due to Canadian Champion Ty Pozzobon’s night win at the final BFTS event, and some strong riding in the last half of the year, he has qualified for his fourth World Finals. Because the Canadian Champ is already locked into the BFTS Finals, the invite goes to Buttar, who also found a night win at the Final BlueDEF event of the season.

Buttar knows that he lucked out just a little bit with Pozzobon being able to ride his way into the World Finals, and said he is happy for Pozzobon despite taking a PBR Canada Championship.

“He deserved every bit of it. It’s been a long time overdue for him to win a Canadian Title and I’m pretty happy for him,” said Buttar, who has won the past two Canadian Professional Rodeo Association Bull Riding titles. “I like winning but when someone else does that deserves it as much as him and as good of a guy I’m just as happy for him winning as I’d be winning.”

Buttar got one taste in the Built Ford Tough Series this year at Tulsa at the end of August, and admitted that is where he wants to be.

“The atmosphere there is unreal. Not like any other event I’ve been to. The other bull riders and everyone there have a different mentality and it’s awesome,” said Buttar. “Everyone is cheering for everyone, not saying it’s not like that up here but when someone makes a ride there everyone gets into it it doesn’t matter who it is. It’s just something you have to see to understand.”

Many riders will admit there are some slight differences in the bulls in the United States and Canada. One of those differences that Buttar notices up front is size.

The BlueDEF Finals this weekend offers a bye into the PBR’s World Finals three days later for five bull riders. Buttar wants that shot. With that shot, the PBR World Finals could have four Canadian Competitors between Buttar, Pozzobon, Aaron Roy and Tanner Byrne.

“I think it would open the door for more guys up here to be wanting to go down there and make the tour. It’s kind of a scary thing to leave what you know up here and go down there not knowing what to expect, but we have a lot of talent up here, riders and bulls included, and it’s starting to show,” Buttar said.

Buttar didn’t divulge his goals for 2017, but with spending an event on the BFTS series, taking home points on the BlueDEF tour, and making BlueDEF Finals all next to another season leader buckle in the CPRA, one wouldn’t expect his plans to change too much.

“When it comes down to it bull riding is bull riding, just depends on your preference. Some guys are strictly rodeo some are strictly PBR. I’ve done the rodeo the past five years and wanted to try the PBR this year to see what they were about. PBR has pretty cool productions to be a part of, but there’s also pretty cool rodeos to ride in to. All in a persons own preference really.”

For more on the BlueDef Finals implications in the race for the PBR’s World Finals, check out Justin Felisko’s piece from PBR.com on Thursday.