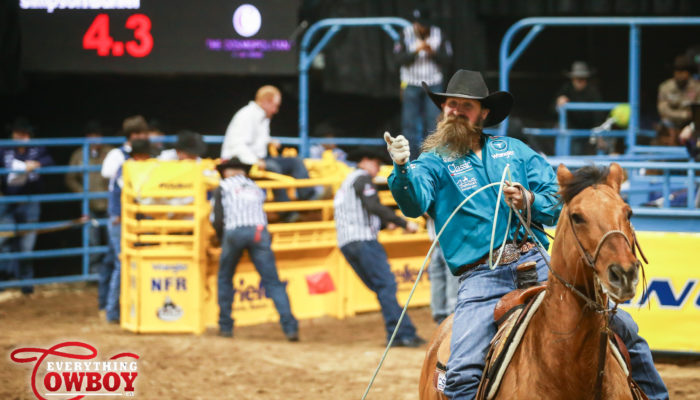 In 2016, Canadian rodeo fans were ecstatic to see eight contestants representing the Maple Leaf at the Wrangler National Finals Rodeo in Las Vegas. They have even more to cheer about this year, as the ranks have swelled by one. As the 2017 regular season drew to a close with the end of September on Saturday, there look to be are nine qualifiers for this year’s NFR from north of the 49th parallel.

Jordan Hansen becomes the first bull rider to compete from the yellow chutes since Rob Bell and Kagan Sirett did so in 2001. The defending Canadian champion surged to the inner ranks of the top fifteen late this summer and never left, finishing in 13th place with over $92,000 won. Hansen, of Okotoks, told a reporter earlier this summer it would mean a lot to him to be the first Canadian bull rider in so long to get there.

The heartbreak story comes in the team roping, where World Champions Levi Simpson and Jeremy Buhler wanted to be able to return for a chance at defending their title. As sometimes happens in the two-man event, the header and heeler rankings don’t always match partnerships. The Days of ’47 Cowboy Games in Salt Lake City, with its unique qualification format, jumbled things up a bit this year too, and when the dust settled at season’s end, Buhler hung on to 15th spot for the heelers, but Simpson was in the ‘crying hole’, even though their earnings were identical. At his second NFR, Buhler has determined his heading partner as Tom Richards, the No. 8 man in heading standings. The consolation for Simpson and Buhler is the dynamic duo did hang on to their season leader honors in Canada where they rope for even money for the first time at this year’s CFR in Edmonton.

The largest contingent of Canucks will compete in the saddle bronc riding, where Big Valley’s Zeke Thurston put himself in a good position to defend his World buckle by finishing up the season in second place, behind leader Jacobs Crawley. He put an exclamation point on his season by picking up $1856 at the weekends’s Wrangler Champions Challenge in Sioux Falls, SD, to notch his third NFR appearance.  Not far behind them is Layton Green, who was motivated all season long by just missing the NFR cut in 2016. This year he left no doubt he belonged there, going on a summer tear unmatched, and finishing the year in fifth spot overall, for his NFR debut. He, too, wound up the year on a winning note, by sweeping the GrassRoots Finals in Calgary. While the money won’t help his world rankings, it does boost his Canadian haul alone to over $78,000. They’ll be joined by Canadian champion Clay Elliott, at his second NFR, finishing the year in 11th place.

It’s NFR number three for bareback rider Jake Vold, who specializes in capitalizing on big opportunities, like San Juan Capistrano and Pendleton this summer. Last December he worked all the way up to second for the world, earning over $165,000 in Las Vegas alone. He’s at 8th going into the Finals. Another cowboy who also shines in the City of Lights is fellow rigging man Orin Larsen. His chances of a third NFR looked a little dicey late this summer, after he had to spend a little time on the injured list. But he came back with a vengeance and qualified in 11th spot. He finished on a high, by claiming a record 7th WCC victory, and his fourth this year, at Sioux Falls. He’ll be heading to the NFR as a newlywed!

Canada’s presence in the steer wrestling will be bulked up by a pair of qualifiers this year. Scott Guenthner is off to his first NFR, after a consistent, stellar summer of rodeo, which left him in fifth spot, and earnings before Vegas of just under $100,000 when the books closed. His traveling partner in #teambigwhitetruck, as they were known, Tanner Milan, will be right alongside him in Las Vegas, making his second journey to the NFR. He finished up the season in eighth spot.

It’s the first time the Canadian numbers in Las Vegas have been so high since the rodeo heydays of the 1990’s, when eleven contestants made the cut in 1992, and ten were there in both 1991 and 1997. The last time the magic number was nine was back in 1994.

Last year, out of the eight Canadian NFR competitors, three Canadian World Champions emerged. Could that number grow this year as well?