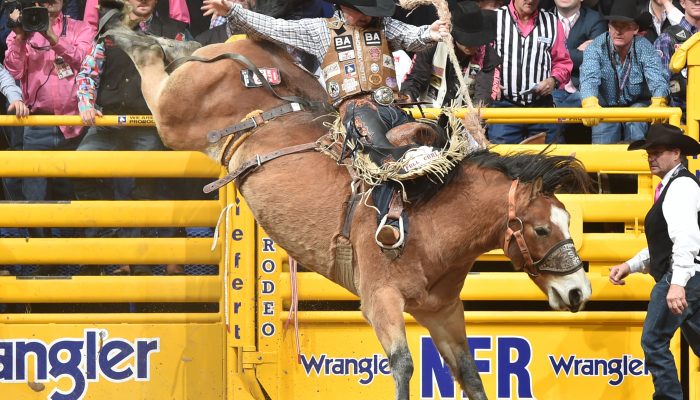 Near Record Ride Wins Watson Round 5 of #WranglerNFR

Jake Watson rides Lunatic From Hell for 92 points in Round 5 of the 2019 Wrangler National Finals Rodeo. Photo by Dan Hubbell.

LAS VEGAS — In his second trip to the Wrangler National Finals Rodeo, Jake Watson now has his first round win.

Watson did so in spectacular fashion as well in a 92-point effort against Lunatic From Hell which is only one point off the WNFR arena record.

“Oh, I don’t know it it’s sunk in yet,” Watson said after the round win. “My adrenaline hasn’t calmed down quite yet. It feels pretty dang good though.”

Through the first four rounds he had three no-scores but didn’t feel deterred.

“No, I try to go with the mentality that I did all the hard work in the regular season and I’ve just got to enjoy it, no matter what happens here,” he said. ” I just had a slow start. I can’t really explain it, but hopefully that part of it’s over now and I can keep making money every night.”

The 92 points was worth $26,231 moving Watson’s WNFR earnings to $41,731 including his $10,000 show up check. The horse has been one riders have won a ton of money on this year so far with other incredibly high scores.

“I knew a lot about it,” Watson said. “I’ve see all my friends get on it a lot of times and I’ve been waiting a lot of years to get on it. I’m glad I had him here. It was everything I expected and more. He’s definitely one of my favorite ones now.”

With five rounds to go, Watson is No. 8 in the world and No. 7 in the WNFR aggregate race.

Fellow Canadian bronc rider Zeke Thurston remains No. 1 on the planet, ahead of No. 2 Ryder Wright but $10,500. In Round 5, Tough Enough to Wear Pink night in Las Vegas, Thurston rode Flood Tide for 82 points and a split of sixth. Now, he’s No. 4 in the event aggregate while Ryder is splitting 10th and 11th. Brother Rusty leads the charge but sits No. 3 in the world, $56,000 back of No. 1 Thurston. Dawson Hay was bucked off once again in Round 5.

Jordan Hansen was bucked off in Round 5 and Sage Kimzey leads the charge to his sixth-straight gold buckle by a margin of $100,000.

Team Ropers Clay Smith and Jade Corkill are first in the team roping, four-time Canadian Champion Shane Hanchey is first in the tie-down roping while Emily Miller holds down the No. 1 spot in the barrel racing event through five rounds.