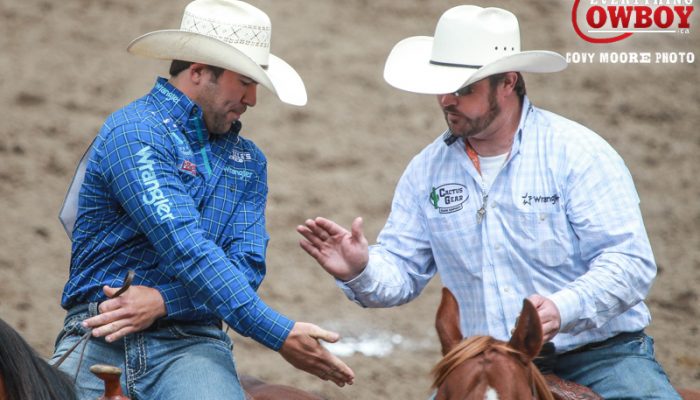 It’s called Labour Day because it recognizes and celebrates the achievements of workers across the country.

Morgan Grant takes the spirit of the Labour Day weekend to heart. And as he has done in the past, the 2013 Canadian High Point champion enjoyed a productive and profitable weekend. The Granton, Ontario native “worked” the IPE and Stampede in Armstrong and the Merritt Pro Rodeo for just over $8,000, part of an $11,000 weekend including his earnings in Ellensburg and Walla Walla, Washington.

“That’s one of my favourite rodeos for sure,” Grant revealed. “It’s such a great production and it’s under the lights. The crowd really gets into it—it’s like a party.

“I did really well there last year too and in 2013, that was where I first started talking to (former Miss Rodeo Canada) Gillian Shields,” Grant chuckled. That worked out rather well too as the couple will be tying the knot on October 15.

This year’s British Columbia haul carried the 2013 Canadian High Point champion to just over $40,000 and a solid lead in this year’s High Point battle.

”This is the most regular season money I’ve won in my career so far,” the Texas A and M alumnus acknowledged. “Plus it’s really good to be going to the CFR in both my events. It’s a big advantage to be in two events in Edmonton when you’re trying to win the High Point.”

And Grant makes no secret of the fact that he has his sights set on capturing for a second time the prestigious award that goes to the highest earning cowboy in any two events over the entire season (including the Canadian Finals Rodeo).

And once again it was the Ponoka Stampede that marked something of a turnaround for the second generation timed event specialist.

“I was pretty cold all spring,” Grant admitted, “but my (second place) run in the short go at Ponoka pretty much changed my year. There are peaks and valleys in every season for every competitor but you have to try to extend the highs as long as you can and just get through the lows.”

Grant is quick to point to horsepower and great hazers (Cody Cassidy, Tanner Milan, Bo Anderson) as the keys to his bulldogging success. “My horse, Bumps, and I have really come together in the last half of this season. I think I’m riding him better now. And if I need to give him some time off, I’ve been able to ride Curtis Cassidy’s horse or Dustin Walker’s horse and they’re just outstanding.”

Next up on the CPRA schedule is the Medicine Lodge Fall Roundup with action getting underway at 1 pm on Saturday, September 10.

The final performance of the IPE and Stampede in Armstrong was also the finale of the 2016 Wrangler Canadian Professional Rodeo Tour. Dubbed the Wrangler Shoot-Out, that all important Sunday performance saw the Shoot Out Champions crowned along with the overall Wrangler Tour titleists decided. The 2016 champions are:

Vold, Flundra, Buttar, Shiozawa and Cassidy all earn byes to the 2017 Calgary Stampede.

Next up on the CPRA schedule is the Medicine Lodge Fall Roundup with action getting underway at 1 pm on Saturday, September 10.