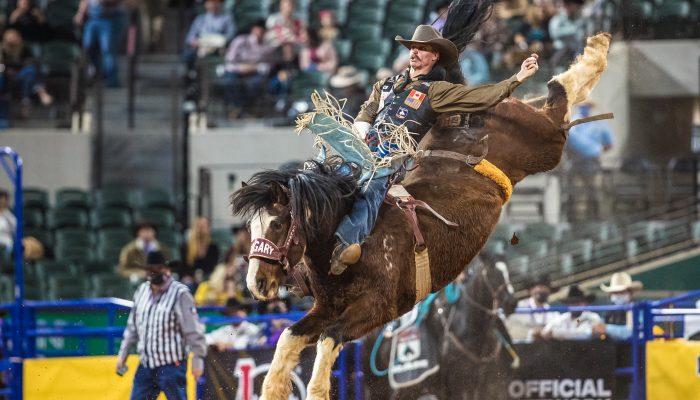 Orin Larsen rides Yippee Kibitz from the Calgary Stampede for 90 points to win Round 7 of the 2020 Wrangler National Finals Rodeo in Arlington, Texas at Globe Life Field. PRCA ProRodeo photo by Clay Guardipee

CALGARY, Alberta — It may have taken a week, but Team Canada struck in a big way on Wednesday night at the 2020 Wrangler National Finals Rodeo with an All-Canadian matchup of Orin Larsen and Yippee Kibitz from the Calgary Stampede taking top honors in the first event of the night.

In the end, it paid off for 26,231 points, the actual payout of which is guaranteed to be 60% in actual dollars. From No. 9 where he started the night, Larsen back up to No. 5, still two spots back of No. 3 where he entered the night but within striking distance with three nights to go. The Manitoba man now in Nebraska is less than 63,000 points back of No. 1 Tim O’Connell who finished out of the money in Round 7.

Pending a re-ride from Leighton Berry, @OrinLarsen could be the first Canadian to win a round at the 2020 #WranglerNFR, on a Canadian horse from the @calgarystampede to boot in Yippee Kibitz with 90 points. pic.twitter.com/GSUL5qKHfW

Game plan for the Manitoba man? “Nod your head and ride like a cowboy!” We chatted with @OrinLarsen about his 90 point ride on Yippee Kibitz from @calgarystampede for his first round win of the 2020 #WranglerNFR. Watch the interview here: https://t.co/bqdVufAaSS @PRCA_ProRodeo

Next best in Round 7 were both Kolton Schmidt and Zeke Thurston taking third in their respective events.

Schmidt was the final of five Canadians to earn a check at the 2020 Wrangler NFR, completing the team with three rounds to go. In the first six rounds he and partner Hunter Koch wouldn’t register a time. When they did get a time, they made it count on Wednesday night for a 4.4 worth 15,645 points each. Despite the points Schmidt and Koch remain the No. 15 team in the PRCA. Levi Simpson and Shay Carroll went out of the average with a no time on Wednesday night, they sat fourth prior to the round. Charly Crawford and Logan Medlin win the round at 3.8.

After splitting third on Tuesday, Thurston took third outright on Wednesday night at Globe Life Field, Home of the Texas Rangers and 2020 World Series. Coming in the reigning champ, the Big Valley, Alberta man is out of contention for a record tying third World title as a Canadian. He ranks 10th in the world after an 88 tonight on Bartender from Dakota Rodeo.

Canada's @zeke_thurston has his second check in as many nights after this 88 point ride on Bartender from Dakota Rodeo for third in Round 7 at the #WranglerNFR pic.twitter.com/3MIGGIlxyd

After winning the first two rounds in the bull riding, Stetson Wright now has a round win in the bronc riding at the Wrangler NFR after posting his third 90 point ride of the week. On Wednesday night it was a 90.5 on a horse by the name of Larry Culpepper. Later in the evening he joined a group of elite and very short list of athletes to win the round in two roughstock events in the same night at the Wrangler NFR. Wright went on to take the bull riding thanks to an 89 on Slinger. Wearing back No. 7, it was a fitting night to win both go-round buckles.

It's been a few years since a roughstock contestant won both the bronc riding and bull riding in the same round at the #WranglerNFR. Wearing back No. 7, @StetsonWright7 does it in Round 7 from Arlington, Texas after this 89 point ride on Slinger. pic.twitter.com/qJwa4P3Kzm

What’s the best birthday present a rodeo cowboy could ask for? A round win at the Wrangler NFR and that’s just what Clayton Hass earned himself on Wednesday night with a 3.4 in the bulldogging. Canada’s Curtis Cassidy clocked a 4.2 but the broken barrier put him up to 14.2 and 15th in Round 7.

Wrapping up the evening, Hunter Herrin earned his second round win of the week after another quick run, this one at 6.8 seconds while for the second night in a row, Emily Miller-Beisel took the barrel racing with the fastest time of the week, a 16.85 to beat World No. 1 Hailey Kinsel by 5/100th’s of a second.