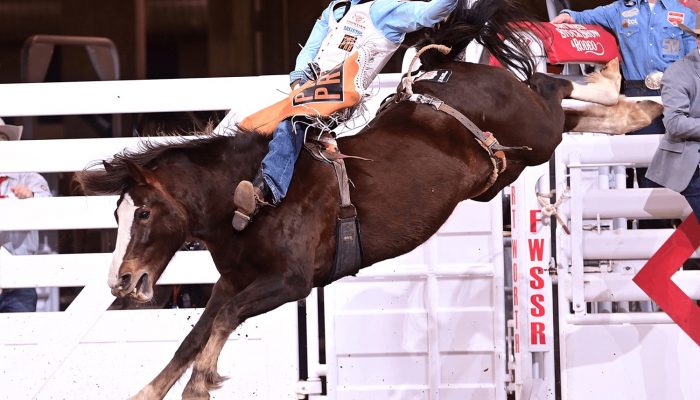 FORT WORTH, Texas (Feb. 5, 2022) — The Fort Worth Stock Show & Rodeo came a rousing conclusion on Saturday night with the final performance of the ProRodeo Tournament.

Another reigning world champion, saddle bronc rider Stetson Wright, got the win with a record-setting ride of 91.5-points. His father, Cody Wright had held the record previously at 91 points. That was set in the Will Rogers Coliseum in 2011 and got the elder Wright the win. Stetson Wright is the third member of his famous saddle bronc riding family to earn the buckle here. His father won it three times, and his uncle Jake Wright got the championship in 2017. Stetson also rides bulls and is a three-time all-around world champion. He earned $25,880 in Dickies Arena.

Wenda Johnson of Pawhuska, Oklahoma has set the barrel racing on fire here this week. It started in her qualification rounds when she set a record at 16.17 seconds. She blew that away on Saturday night when she and Macgyver Moonflash, an eight-year-old bay gelding, stopped the clock in 16.08 seconds. Johnson has qualified for the NFR the past two years by choosing the rodeos that she goes to carefully and not going to as many as expected. She also has a full-time job as a nurse practitioner. The $24,520 that she won here will give her a big boost and put her on the way to a third NFR qualification.

Tristan Martin from Sulphur, Louisiana won the steer wrestling with a 3.9-second run. The former high school and college rodeo champion qualified for his first NFR last December and is now working towards his first gold buckle in the professional ranks. Prior to Fort Worth’s rodeo he was third in the world standings. The $24,260 he got in Dickies Arena could move him up to the top spot.

This is the second year that the FWSSR ProRodeo Tournament has featured breakaway roping and the winner just lives about an hour away at Dublin. Kelsey Domer stopped the clock in 1.8 seconds to get her first buckle in Dickies Arena. She earned a total of $26,800.

Tie-down roper Bryson Sechrist got the biggest win of his career here on Saturday night. Sechrist of Apache, Oklahoma stopped the clock in 7.2 seconds to win $23,760. Reigning world champion team ropers Kaleb Driggers from Hoboken, Georgia and Junior Nogueira, from Presidente Prude, Brazil were at the top of the leaderboard with a 4.2-second run. They each took home $25,093.

The FWSSR ProRodeo Tournament was the first rodeo of the year for seven-time world champion Sage Kimzey from Salado, Texas. The new father made good on a promise to be his best for his family and rode all of his bulls. His Saturday night ride of 91.5 points on 4L-Diamond S Rodeo’s Space Unicorn got him his first Fort Worth championship and $29,827.

A near capacity crowd was on hand to see the conclusion of the rodeo and plans are underway for the 126th edition in 2023.

FORT WORTH, Texas — The following are unofficial results from the FWSSR ProRodeo Tournament’s Championship Round at the 125th edition of the Fort Worth Stock Show & Rodeo, Saturday, February 5, 2022.