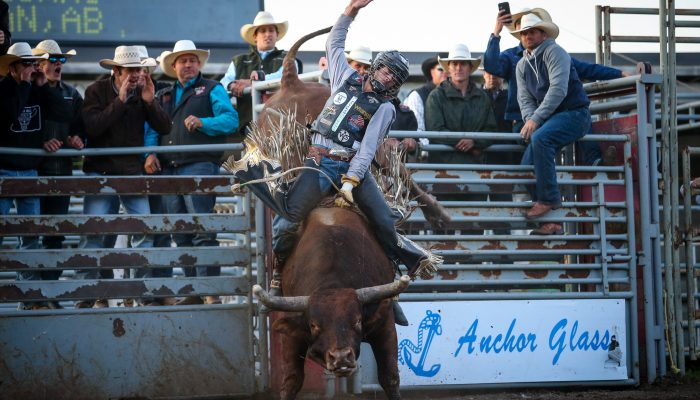 On his first bull of the night as the final man out in the first round of competition, West rode Positively Bangin’ (Sawyer Pro Rodeo) for a round-bst 87 points. As the last man out of the chutes on the evening in the final round, West matched up with CFR, Wrangler National Finals Rodeo (WNFR) and PBR World Finals selected Red Pheasant (Outlaw Buckers). When the marks were tallied the score was an impressive 90 points to give West the win worth $4,514.46.

Coming into Oyen outside the Top 12 in Canadian Pro Rodeo, West resides in a spot which would send him to the CFR should he be there still in the middle of October.

Second in Oyen and the only other man going 2-for-2 on the night was 2016 Canadian Pro Rodeo Champion and 2017 WNFR Qualifier Jordan Hansen (Okotoks, Alberta).

Hansen rode Tennessee Whiskey (Outlaw Buckers) in Round 1 for 86 points and added a huge 89-point effort on Brahma Boots Chrome (Outlaw Buckers) in the finals. For his work, Hansen adds $3,431.41 to his CFR account. This past weekend in Morris, Manitoba Hansen took over the lead in the Canadian Pro Rodeo standings and now adds to the lead courtesy of this finish over No. 2 Edgar Durazo (Moctezuma, Sonora, Mexico).

Courtesy of an 86.5 on Dunt (Skori Bucking Bulls) in Round 1 and a buckoff against Fish Camp (Outlaw Buckers) in the final round, Todd Chotowetz (Major, Saskatchewan) finished his Wednesday night in third place overall. Already holding down a CFR berth at this point in the year, Chotowetz neared closer to the $20,000 mark on the year thanks to the $2,531.41 earned in Oyen.

Rounding out the Top 6 in Oyen were Nick Tetz (Calgary, Alberta), Wacey Finkbeiner (Ponoka, Alberta) and Shay Marks (Sunny Brook, Alberta). Tetz rode Sweet Spot (Sawyer Pro Rodeos) for 85.5 points and $1,648.36 but ranked No. 30 in the CPRA heading into tonight.

Finkbeiner entered Wednesday night in the No. 12 spot in the CPRA and rode Billy Big Rigger (Outlaw Buckers) for 83 points in Round 1 to finish fifth to earn $1,059.66. Despite his efforts, he was passed by West after his win to now sit on the outside looking in with three months left to go in the season.

Marks rode Hanna Motors Full Throttle (Skori Bucking Bulls) for a score of 80.5 points to finish the night in the No. 6 spot. Having only competed at a handful of rodeos to this point in the season, three as of the July 18th standings, Marks’ $588.70 will inch him closer to possibly qualifying for his first CFR.

Bull of the Night honors went to Curtis Sawyer for the Outlaw Buckers superstar talent Red Pheasant while Beau Gardner of Arrowwood, Alberta made a huge move in the steer riding standings earning $1,144.60 for his 78-point ride to win the Ty Pozzobon Memorial buckle. Gardner entered Oyen No. 8 in the Canadian standings and could now sit as high as No. 4.