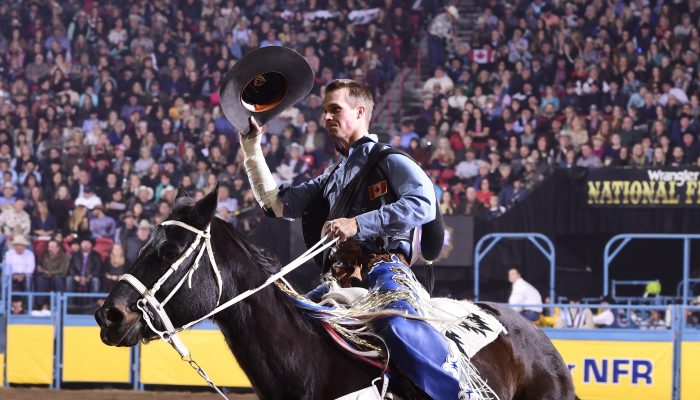 Larsen wins Round 6 at NFR

LAS VEGAS – Orin Larsen would love to get off to a faster start at the National Finals Rodeo. He’d prefer to not wait until the sixth round to start earning Vegas cash.

He’ll take it, though. Larsen rode Pickett Pro Rodeo’s Night Gazer for 91 points to win Tuesday’s sixth go-round, collecting $26,997 in the process. It was his first payday of this year’s championship. How did he handle the five rounds of trouble?

“I’ve got a really good support system behind me, and I pray a lot,” he said. “My wife and my mentors help keep me positive when I’m feeling low. Without them, I’d be pretty well done.”

Instead, he refocused and found the perfect dance partner, even though he knew nothing about Night Gazer before the ride.

“I guess I thought he was coming out there and hop around a little bit, but he did a little more than that,” said Larsen, 30, of Inglis, Manitoba, now living in in Gering, Nebraska. “He caught me off guard. I think it cost me a little bit of riding more my style, but I’m not complaining by any means. It felt great. It felt awesome.”

So did finally cashing in an NFR paycheck. He’s hoping the trouble is over and he can stay on a roll for the final four nights of the ProRodeo season.

“I think it was the drawing a little,” he said of how the random draw matches cowboy with bucking horse. “Ultimately it was me. I was getting too worked up, getting too excited and trying to do too much. I was trying to be 95 when I can only be 85. I will put the blame on me.”

It’s part of the process. He’s not the first and won’t be the last to try to do too much. Even veterans can struggle with it. Sometimes it takes a little retraining of the mind to fix the issue.

“I plan on having a year when I can find that out in Round 1,” he said with a laugh, noting that he’s waited until the sixth round to earn a paycheck three times in his seven years competing at the NFR. “Then I can roll through it. It’s not failure by any means; it is a learning curve.

“You can learn something every day about rodeo, the NFR, anything.  The day you think you’re done learning is the day you should hang it up.”

He’s dropped two spots to 11th in the world standings since the start of the NFR six nights ago, but he’s pushed his season earnings to $134,840. He still has four more nights to collect more cash.

He relies on that support system that’s been so beneficial to help him get through each day.

“I just get some family time, going out with my wife and folks and just spending a lot of time with them,” Larsen said. “At night, I go to bed and get some decent sleep. I’ll get up and stretch and do whatever responsibilities I have during the day. When I get done with that, I’ll go to the room, do some stretching, have a little snack, then it’s game time.”

The game is on from here on out.