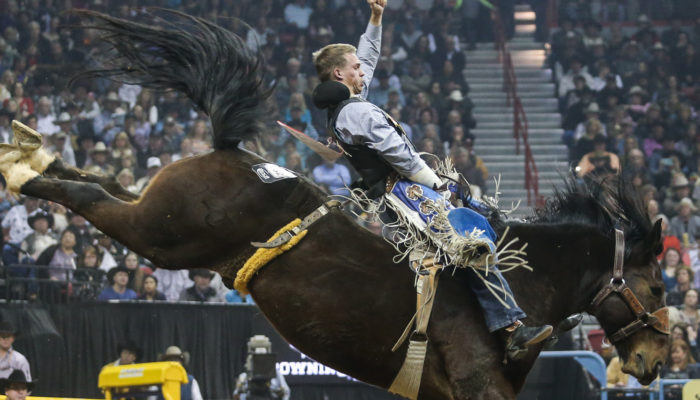 LAS VEGAS, Nevada — Canadian Night at the 2016 Wrangler National Finals Rodeo proved to be another special one.

This is Orin Larsen’s second time to ride under the bright lights at the Thomas & Mack and now he has his first go-round win.

“I guess better late than never,” said Larsen, of Inglis, MB. “I’ve wanted to do better in the early rounds at both of the NFR’s I’ve been to, but to win on Canadian Night is icing on the cake. I’ve always wanted to have Full Baggage and there’s no better place to draw him than here in Vegas. It was like a boxing match, and luckily I came out on top. I’ve been waiting since I was 8 years old to win a go-round buckle so it’ll be emotional to get it tonight.”

Battling a pair of separated ribs, Larsen is fighting through the pain, doing so tonight for a check worth $26,231.

“I don’t have a choice,” Larsen said. “I’ve worked my whole career to be tough enough to never say ‘uncle’, and I’ve made it this far. So I’m not quitting and will ride until after the 10th round. The gold buckle isn’t in my picture this year, but I want to leave my mark. Winning tonight really made the last seven nights a lot better.”

Canada’s bronc riding contingency all got paid again on Canada night, this marks the third straight night for them all to do so. Clay Elliott (Nanton, AB) was the best thanks to a gorgeous 86 point effort on the ever so solid Lunatic Fringe for second place and $20,731. That brings his earnings up to $52,942, he ranks seventh in the aggregate and 10th in the world.

Zeke Thurston (Big Valley, AB) was a point behind on Manhattan Moon from Pete Carr for $15,654. Thurston, Canada’s best shot at the gold buckle, is now second in the aggregate and back up to third in the world having earned $79,808 in eight days. With two rounds to go, Jacobs Crawley is out front by $53,000 and only a spot behind in the aggregate. Leading said aggregate is Hudson’s Hope, BC’s Jake Watson, a full horse ahead to date with 663 points on eight. For sixth tonight, Watson picked up $4,231 bumping his total to $79,314 in earnings in Vegas to sit seventh on the planet.

Levi Simpson (Ponoka, AB) and Jeremy Buhler (Arrowwood, AB) dropped down to third in the team roping aggregate standings after a no time on Thursday. Kolton Schmidt (Barrhead, AB) and partner Shay Carroll stopped the clock in a time of 3.9 seconds but broke the barrier. Canadian contestants eclipsed the $500,000 mark in 2016 WNFR earnings.

Cooper Tonneson was watching over the arena once again on Thursday. Tyler Smith and Cooper’s Comet won the round in the bull riding at 89 points. This brings the total number of go-round buckles won by Canadian Cowboys or stock to 15. Nansen Vold is also batting 1,000 with two round wins in two outs here at the WNFR. 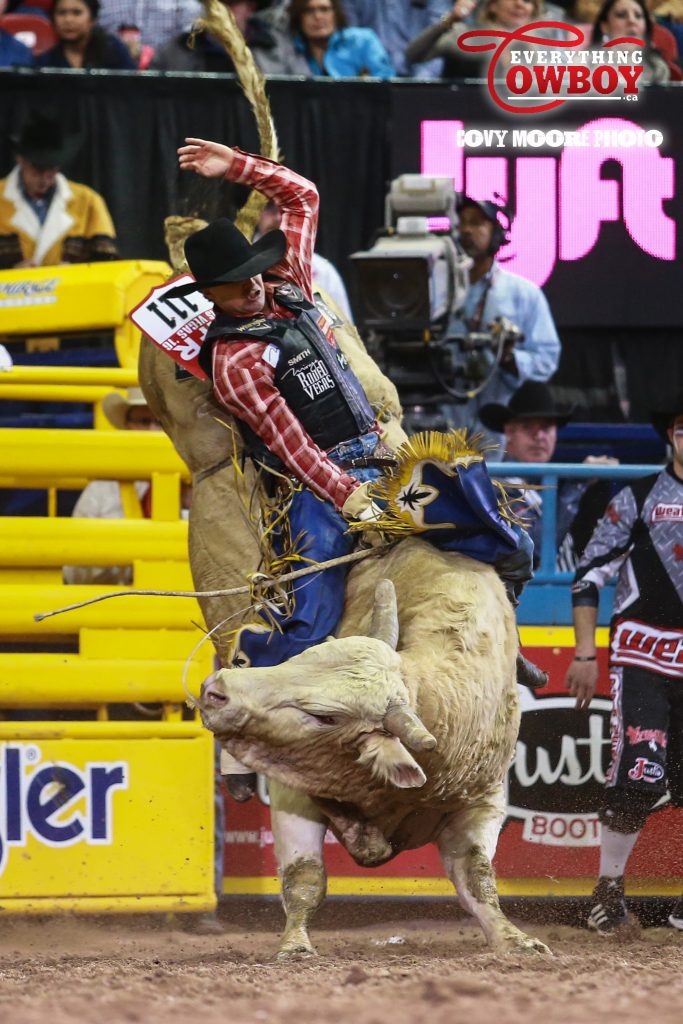 Earnings on Canadian bucking stock through Round 8: $344,246