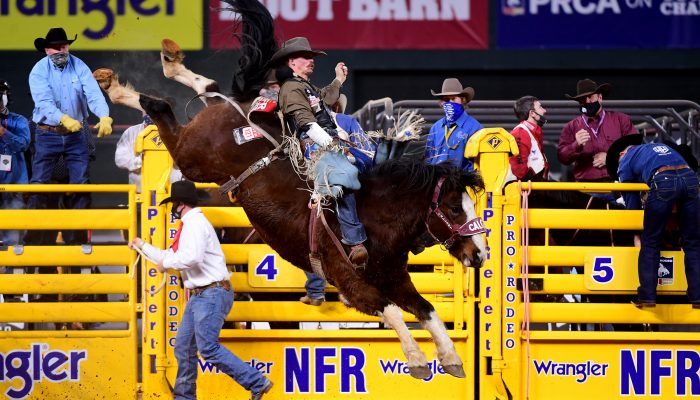 “I’ve been on that horse in 2018 in the short round of Pendleton (Oregon), and I actually ended up winning Pendleton on him,” said Larsen, who rode Yippee Kibitz for 90 points to win Wednesday’s seventh go-round. “All these Calgary horses have had all this time off with no rodeos up in Canada. They are fresh, and they are all really wanting to do their job.

“I knew when I had a Calgary horse by my name that I definitely had a shot.”

Yes, he did, and he still needs it. Larsen entered this year’s championship No. 3 in the standings, but after missing the pay window for the first five rounds, he dropped as low as ninth. After making good in Rounds 6 and 7, the Inglis, Manitoba, cowboy has shot back up to fifth with $128,622. In just two nights’ work, he has pocketed $37,231 at the NFR.

“I’m just happy to get a check at this point,” he said, showcasing a wide grin that indicated as much. “I take full responsibility on the calls I’ve made. We all took great horses to the NFR, and everybody is riding outstanding. To say it has come down to a drawing contest at the NFR is unheard of, but that’s what it’s come down to.

“They are great horses, but everyone is just riding good.”

On Wednesday, nobody rode better than Larsen, who now lives in Gering, Nebraska. He and the other 118 contestants are competing at Globe Life Field – home of the Texas Rangers baseball team – for the first time because the global pandemic forced the event to move away from Las Vegas this year. That’s an adjustment for everyone, including the bucking horses.

“I think it’s affecting a lot of horses this year,” said Larsen, who earned $26,231 for his round victory. “Compared to smaller rodeos and smaller arenas, a lot of these horses are never in and out of your kind of Globe Life Field, which is just gigantic. It will play on a horse.

“Those older horses that buck and are really good … they will do their job every time, but the younger horses that don’t quite have it figured out, well, it might toy on them. It didn’t bother Yippee Kibitz.”

Through his trials and tribulations and a delayed kickstart to his NFR, Larsen has maintained a positive outlook.

“This is still the NFR,” he said. “We are getting on great horses with your pals for good money, and that’s pretty hard to beat. I’m still having fun. This makes it a little more special and enjoyable.”