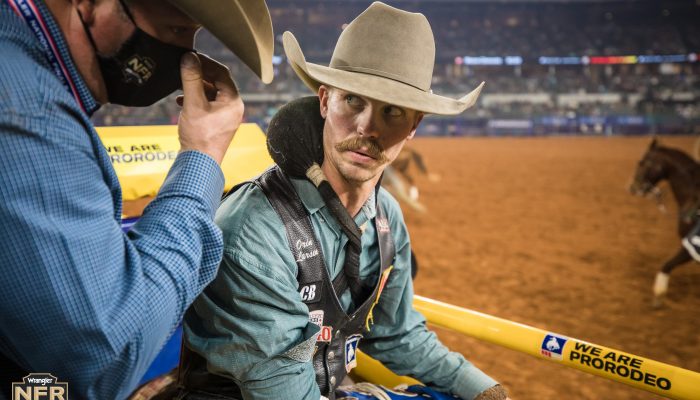 CALGARY, Alberta — A pair of Canadian contestants got their first checks of the week at the Wrangler National Finals Rodeo on Tuesday night.

The Manitoba product was only a point and a half off the win of rookie Cole Reiner on what also happened to be rookie night in at 87.5 points on Little Red Hawk.

After a subpar start to his 2020 Wrangler NFR, Thurston got the monkey off his back after an 85.5 on All Country from Three Hills Rodeo for 11,141 points. Again, theses are points counting towards the PRCA World Standings, the actual payout dollar wise is 60% of the point totals in Arlington.

After a subpar start to his 2020 #WranglerNFR, @zeke_thurston gets the monkey off his back after an 85.5 on All Country from Three Hills Rodeo for a split of third in the sixth round. pic.twitter.com/6bkpLi274U

Through six rounds, Ryder Wright leads all contestants in money won so far at the WNFR after another round win, this one with 90.5 points on a horse called Billie on Tuesday night.

It was a quick round in the steer wrestling, 3.3 seconds by two runs. Jacob Edler and Jace Melvin. Curtis Cassidy mades a solid run at 4.0 but ended up all the way down in 10th in what is the toughest round of bulldogging yet this year.

Cody Snow and Junior Nogueira won Round 6 of the Wrangler NFR in the team roping with the only sub 4-second time on Tuesday night, a 3.9.

Levi Simpson and Shay Carroll got long at 11.0 seconds, two spots out of the money. Despite the setback they remain fourth in the aggregate race which pays over 67,000 points. It’s a big check even at 60%. Kolton Schmidt missed once again.

Reigning World Champion tie-down roper Haven Meged of Montana got things fired up in Round 6 of the Wrangler NFR besting the fastest time of the week, at 6.8 for the win on Tuesday night.

Emily Miller and Chongo found their groove in Round 6 crossing the line in a time of 17.01 for the round win in the barrel racing on Tuesday night. Hailey Kinsel gave Sister a night off and ended up nearly an entire second longer than her time on Monday’s round winning run.

Louisiana’s Dustin Boquet took the bull riding on Tuesday on his third bull of the night after a pair of re-rides. First, he was 60 points, then didn’t nod for his second bull. Finally the third one paid off for 89.5 points on Lonesome You. Sage Kimzey was disqualified for using two hands, Ky Hamilton, Colten Fritzlan and Stetson Wright were bucked off while Ty Wallace placed yet again to take over the No. 1 spot in the world.