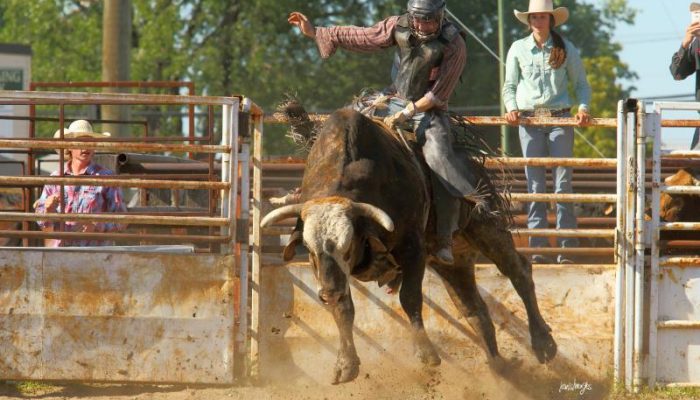 Kyle Eberle is going to be rodeoing hard over the next few weeks as he chases a spot in the Canadian Cowboy’s Association (CCA) Finals.

“I’ve got to really turn it up here,” said the 20-year-old rookie bull rider, who at the time of writing sits in 11th place in the CCA standings.

Eberle, a former novice bull riding season leader in the CCA, got off to a bit of a slow start to this season.

“It’s going pretty good. It started off a little bit slow but the last kind of half here it picked up pretty good, I guess. I started making a few decent bull rides, making some money. Just trying to make Finals like everyone else.”

The Pilot Butte native has been hard at work over the past few weeks as he tries to make up the $500 that he trails his opponent by in the open bull riding standings.

Eberle has been riding bulls for just five years, but already he’s started to make his mark on the semi-pro circuit.

“I didn’t get the chance to ride steers like a lot of guys did and I just kind of leapt into bull riding and started off in the novice for two years,” Eberle said.

The young cowboy’s passion for the sport started after a couple of his buddies attended a bull riding school when they were 14.

“The following year they said ‘hey you should try this out.’ I never ended up going to a school, I’ve never been to a (steer riding) school before,” Eberle said.

Instead, in true country fashion, Eberle learned his craft from one of his neighbours in Pilot Butte.

“Kris Johnson actually up in Pilot Butte. He used to ride bulls and he really helped me out a lot. I got on my first couple of steers at his place north of town.”

From there, Eberle progressed onto some of Jansen’s younger bulls before jumping into the novice events.

“Ever since then he’s just kind of helped me along the way and helped me practice throughout the winter,” Eberle said of Jansen.

Now, as CCA Finals draw ever closer, the young gun is going to have his work cut out for him if he wants to qualify for his first Finals in Open competition.

“Definitely just going to stay on the back of the bull for eight seconds and get some paycheques and solidify a spot into finals.”

Although he has competed at the CCA Finals in the past in Novice competition, Eberle added that he would be excited to be part of the first Finals in Swift Current.

“I think it will be a little bit of a different atmosphere (from Regina), because all the things going on at Agribition. But in Swift it will definitely just focus on the rodeo, people are going there for the rodeo to watch the entertainment,” he said.

If he does manage to get there, Eberle’s experience at the finals in the novice events means he knows what it will take to climb further up the standings as the rodeo goes on.

“You’ve got to go into every ride and just kind of have in your head that you’re here for a purpose and just want to stay on the back of bulls and hope to come out with the best of them.”