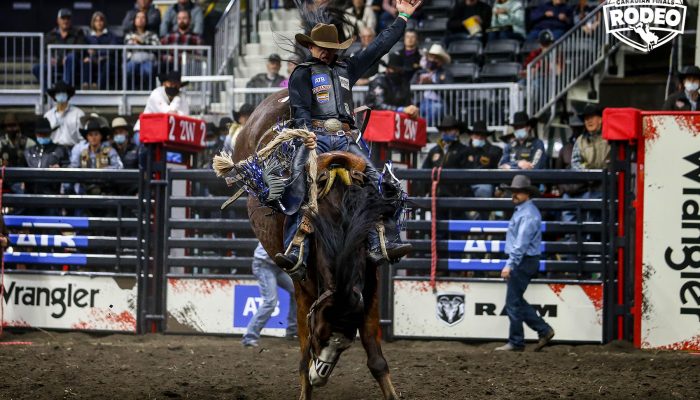 Knocking the Dust Off at CFR

While there are over 30 first time qualifiers at the 47th edition of the Canadian Finals Rodeo, several veterans made their presence felt on night number one at the Peavey Mart Centrium in Red Deer, Alberta.

Five time Canadian Steer Wrestling Champion, Cody Cassidy, is looking to take care of some unfinished business. He took a step in that direction during the first performance with a blistering 3.5 second run.

“I won the average in 2019 and was one steer away from winning the Canadian title that year. I am definitely happy I’ve got this round win and I’m looking forward to the rest of the week.”

In the classic event of rodeo – the Saddle Bronc Riding – it was the last man out, Zeke Thurston, who earned top money on the night. The defending Canadian Champion and two time World Champion was excited about his go-round winning 87 point ride on Vold Rodeo’s Split Decision.

“If you can win that first round, kind of hit them in the face and let everybody know you’re there, it gets the ball the rolling and helps get some momentum set up for the rest of the week.”

And in the ladies barrel racing, four time CFR qualifier Lynette Brodoway and her gelding Cowboy made the most of her ground draw (second barrel racer out) to post a speedy 14.086 for the round win on CFR night one in Red Deer. The win enabled Brodoway to close ground on season leader Justine Elliott, who she trailed by $3000 coming into the Finals. Elliott finished third in the round on her two time barrel horse of the year, Blondy.

But the first go round wasn’t completely dominated by the veterans. In the bull riding, CFR first timer, Callum Miller, despite nursing a torn PCL (leg) injury and ligament damage on his riding hand, made the most of a re-ride opportunity to post an 87 on Vold Rodeo’s All Access. The Australian-born cowboy was the only bull rider to make a qualified ride on Wednesday night at CFR. When asked about his injury, the likeable Aussie grinned and said, “I’m feeling really good right now. But I was sore coming in and I’ll be sore the rest of the week. Sport Medicine are great at putting us back together and I’ll be trying to do my job.”

In the tie-down roping, it was three first timers sitting atop the leaderboard after night number one. Jason Smith from Wimborne, AB posted a 7.7 second run to capture the go-round win while fellow rookies, Darren Dublanko and Wyatt Hayes split two-three with 8.8 second efforts. The top five men on the leaderboard coming into the CFR all failed to place in round number one.

In the team roping event, the veteran Brady Chappel and his rookie partner Tee McLeod put an outstanding 4.3 second run together to earn the win. Season leaders Dawson and Dillon Graham finished out of the money on night one.

Note: CFR47 will see athletes awarded points rather than money to determine standings and winners throughout the week. Winning rides/runs in the major events earn 9,360 points.