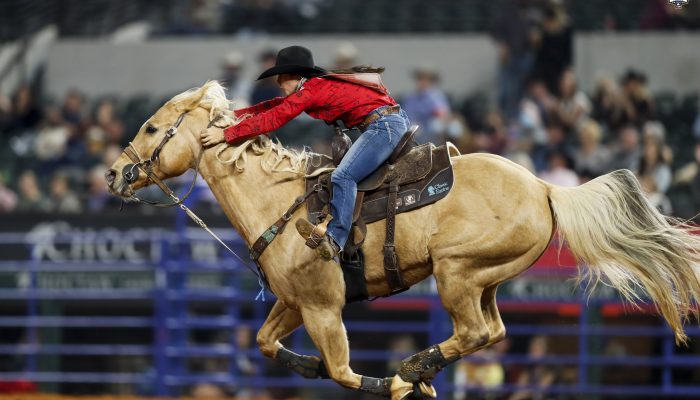 Hailey Kinsel and her horse Sister set a new WPRA world record on a standard pattern on Thursday night at the 2020 Wrangler National Finals Rodeo at 16.56 seconds. PRCA ProRodeo photo by Roseanna Sales.

CALGARY, Alberta — It’s the fastest time ever in the Women’s Professional Rodeo Association (WPRA) on a standard pattern. Coming into tonight, Round 8 at the 2020 Wrangler National Finals Rodeo (WNFR), the record belonged to Hailey Kinsel and her horse Sister.

After tonight, it still belongs to Kinsel, but now, the bar got set even higher.

In the afternoon, Kinsel worked for the Wrangler Network as commentator for the finale of National Finals Breakaway Roping (NFBR) and in the evening, she and Sister rounded the clover-leaf pattern in a time of 16.56.

Her previous record of 16.63 only held up for only a few months. How long will this one last? Thus far, Kinsel and Sister have claimed five round wins at the Wrangler NFR. According to the Cowboy Channel’s Steve Kenyon, the most wins ever in the barrel racing at one WNFR are seven in one year, and Kinsel still has two rounds to go.

Leading the aggregate and world standings, Kinsel is looking for her third-straight world championship.

It's the fastest time ever in @WomensProRodeo on a standard pattern, beating her own previous record at 16.63, @haileykaykinsel and Sister are in a league of their own, further setting the bar at 16.56 in Round 8, their fifth round win of the 2020 #WranglerNFR pic.twitter.com/3ldr3pNLBi

On the Canadian side of Canadian night, both the first two events of the evening were won on Canadian horses, one was a bucker and one was not.

The first event was won on a Canadian bucking horse from the Calgary Stampede at 89 points. The man was WNFR rookie, Jess Pope, and the horse, Xplosive Skies, who was ridden for the second round win this week. Kaycee Feild rode the horse for the win in Round 3 at 91.5 points.

The second event was won on a Canadian timed-event horse in Tyson from Curtis Cassidy by Oregon’s Blake Knowles. The team made a time of 3.6 seconds for their second round win of the week. Knowles split the first round three ways at 3.9. Cassidy himself was out of the money once again, checking in at 14.1.

The first Canadian contestant to cash a check on Canadian night was Orin Larsen who’s now won money on three-straight nights. Larsen rode the Beutler horse Redigo for 85 points and split of third place but remains 70,000 points back of world No. 1 Tim O’Connell. Round winner Pope leads the aggregate after Richmond Champion was bucked off the Northcott Macza bucker Spilled Perfume.

.@OrinLarsen has three checks in as many nights after 85 points on Redigo from the Beutler's for a split of third place in Round 8, also known as Canadian night at the #WranglerNFR pic.twitter.com/WM3qIJS0cj

Catching the next check of the night was Ponoka, Alberta’s 2016 Champion of the World in Levi Simpson. Simpson and heeler Shay Carroll roped their steer quick enough for a four-second run but couldn’t get their ropes tight enough for the judges liking and ended up tied for third on the evening at 4.7. This is their fourth check of the week. Kolton Schmidt unfortunately once again did not place.

After getting flagged out earlier in the week for a crossfire, Colby Lovell and Paul Eaves won Round 8 with a time of 4.3 seconds.

Like fellow Canuck Orin Larsen, two-time world champ Zeke Thurston is 3-for-3 getting paid at the Wrangler NFR over the past three nights. On Canadian night it was a split of third for 13,327 points thanks to an 86 on Angel Eyes from Three Hills Rodeo.

Through Round 8 of the finals in Arlington, Ryder Wright is the only bronc rider to have rode all his broncs and has won four rounds. He did it again on Thursday night with an 88 on American Hat’s Positive Times.

Westyn Hughes won Round 8 in the tie-down with a 7.4. After Ryan Jarrett doing some serious COWBOY SH*T last night, that’s all we need to report.

Wrapping up thing on the night in the bull riding, unless anything crazy happens, it looks like Sage Kimzey won’t win his seventh straight gold buckle. The streak had to come to an end at some point and six might be it. There’s still the possibility at this point but he’s over 70,000 back of No. 1 Ty Wallace in No. 6 and No. 8 in the WNFR aggregate. Wallace put another nail in the coffin with another round win. He split this one at 89.5 points on re-ride bull Soy El Fuego with Idaho’s Roscoe Jarboe who rode Magic Poison.

Wallace also sits No. 2 in the aggregate, but he’s a bull back of No. 1 Colten Fritzlan who’s gone 6-for-8 at his first WNFR. Kimzey has ridden three. At this point the best he can do in the aggregate would be second. The wild card in the bull riding is that the ground money all counts towards the standings. It’s not over yet.

Also on Canadian night, Canadian country recording artist Brett Kissel sang O’Canada for the first time in an opening that included a very entertaining video compilation to start the evening.