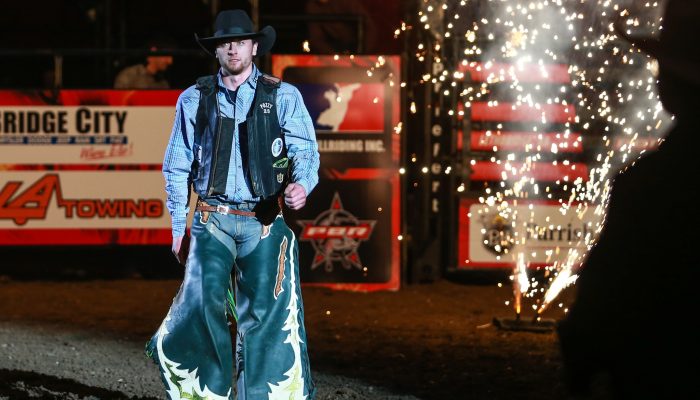 Jordan Hansen Wins in Ponoka to Take No.1 Spot in Canadian National Standings

PONOKA, Alberta – Jordan Hansen (Okotoks, Alberta) notched his second win of the 2017 season on Friday night, going a perfect 2-for-2 at the PBR event at the Ponoka Stampede, earning enough points to overtake the No.1 spot in the PBR’s Canadian National Standings.

The 23-year-old rode Body Special (Outlaw Buckers) for 83 points in Round 1 and Wish Right Now (Vold Rodeo/Prescott) for 87 points in the championship round to best second-place Chase Outlaw (Hamburg, Arkansas) by six points in the aggregate.

Hansen’s victory also earned him 80 points towards the World Standings. After entering the event ranked No.49, he now sits at No.37, just 45 points outside a coveted Built Ford Tough Series berth.

Outlaw also delivered a perfect 2-for-2 performance, riding Yellow Moon (X6 Ranch) for 81.5 points in Round 1 and  Cross Check (Vold Rodeo/Prescott) for 82.5 points in the short go.

Reese Cates (Monticello, Arkansas) finished third in Ponoka courtesy of his Round 1 winning 85-point ride on Bondara (Outlaw Buckers), but bucked off Minion Stuart (Skori Bucking Bulls) in the championship round. Cates earned $3,927 CAD and 30 world points for the performance, elevating him to No.35 in the world standings.

Hometown rider Wacey Finkbeiner (Ponoka, Alberta) nearly won the Touring Pro Division event, but fell short after narrowly missing the eight second mark in the championship round aboard Venom (Vold Rodeo). His Round 1, 84.5-point ride aboard Shot of Whiskey (Two Bit Bucking Bulls) secured Finkbeiner a fourth place finish, his season best at a PBR event so far in 2017. For the showing, he takes home 20 world points, 120 Canadian points and $2,737 CAD.

For Lambert, the 77.5 Canadian points he also earned solidified his No.2 ranking in the Canadian National Standings.

Next up PBR Canada visits Toronto and Ricoh Coliseum on June 24 for the third and final eastern stop on the 2017 PBR Monster Energy Tour. Action for the PBR’s first-ever visit to the city gets underway at 7:30pm. Tickets start at $25 and can be purchased online at Ticketmaster.ca

Official results from the Ride, Rock & Roll PBR at the Ponoka Stampede Grounds in Ponoka, AB on June 23rd, 2017.