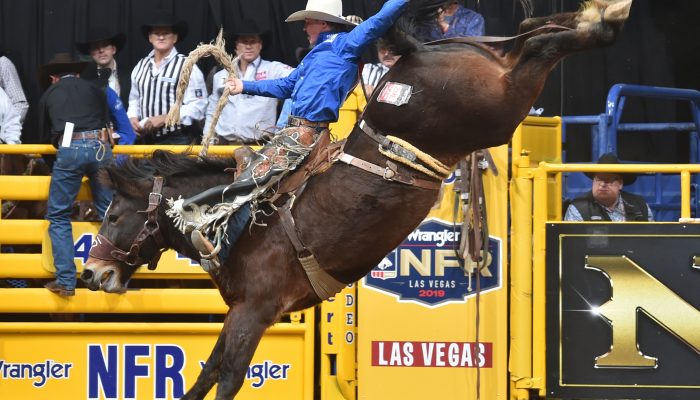 Dawson Hay rides Sue City Sue for 88.5 points in Round 6 of the 2019 Wrangler National Finals Rodeo in Las Vegas. Photo by Dan Hubbell.

LAS VEGAS — In six rounds so far at the 61st Wrangler NFR, three Canadian bronc riders have won the round.

Current World No. 1 Zeke Thurston took Round 1 while Jake Watson nearly matched the arena record of 93 points, at 92 to take Round 5.

“I’ve dreamed of this day since I was just a little kid, watching my dad get presented his buckles and going on the stage with him,” Dawson said. “It’s a dream come true and I can’t even put words to it.”

“It means everything to me,” he said. “A couple days there, I was having some trouble and getting on some really good horses, but not riding the way I did all year. So to come out, have a really good ride and good score going into Round 7, I couldn’t feel more confident.”

Father Rod has been an asset for Dawson.

“He just said, ‘You ride so dang good, and you’ve got to remember that instead of the bad rides. Think about what got you here.'”

Heading into Round 7, Hay ranks No. 8 in the world and No. 9 at the WNFr aggregate.

“At this point, I’m just going to go and try to have as much fun as I can,” Dawson said. “There’s no better or bigger rodeo than this, so I’m just going to try and take each ride one at a time and hopefully walk out of here with as much money as I can.”

Dawson Hay claims his first round win on night six at the #WranglerNFR on Sue City Sue for 88.5 points in Las Vegas! 🇨🇦 pic.twitter.com/hX2ClvvEyE

Also in Round 6, Thurston was called on a markout violation, receiving a no-score. Almost at the same moment, the flank fell off the horse. Despite the call, he remains No. 1 in the world and No. 4 in the aggregate.

Coming off a round win last night, Watson added another score to his finals at 81.5 moving him to No. 8 in the aggregate and No. 9 in the world.

.@ScottGuenthner threw down his steer in a time of 3.9 in Round 6 of the @LasVegasNFR on Tuesday night for a split of second place. #WranglerNFR pic.twitter.com/yWTceAQeYK

Orin Larsen picked up another check in Round 6 after and 87.5-point effort. Larsen added another $5,500 in winnings to still sit No. 2 in the world however No. 1 Clayton Biglow split another round win. Larsen sits No. 8 in the aggregate while Biglow is No. 1. Larsen is No. 2 by approximately $33,500. Clint Laye was 79.5 points to be out of the money while in the bull riding Jordan Hansen was bucked off a Canadian-raised bucking bull in Torch on Tuesday night.