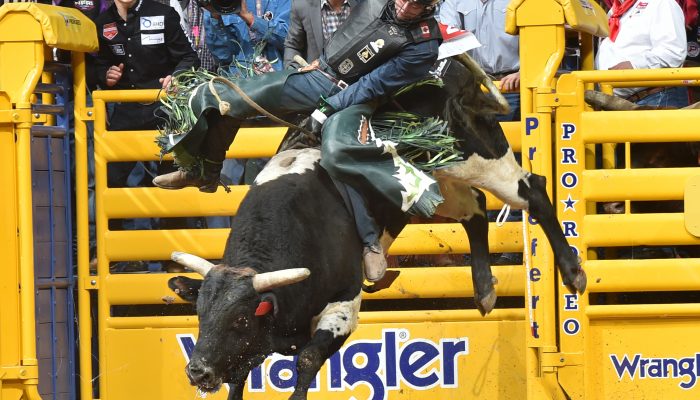 Jordan Hansen rides Jive Turkey for 90 points in Round 3 of the 61st edition of the Wrangler National Finals Rodeo in Las Vegas. Photo by Dan Hubbell.

LAS VEGAS — In his second appearance at the Wrangler NFR, Jordan Hansen now has his first 90-point ride out of the famous yellow bucking chutes.

Hansen’s first 90 inside the Thomas & Mack came aboard a bull called Jive Turkey to leave him second in the round earning him a check for $28,064. After the first three rounds the Ponoka, Alberta man sits first in the WNFR aggregate and No. 5 in the PRCA’s bull riding standings.

All three Canadian bronc riders placed in Round 3 with Zeke Thurston leading the charge. Thurston put up a huge 89.5 on Shadow Warrior from the Calgary Stampede for second place and $20,730. Through three days, he still sits No. 2 in the world but is now only $535.38 behind No. 1 Ryder Wright.

Scott Guenthner got a time but was out of the money while both Orin Larsen and Clint Laye got scores but also didn’t cash a check.