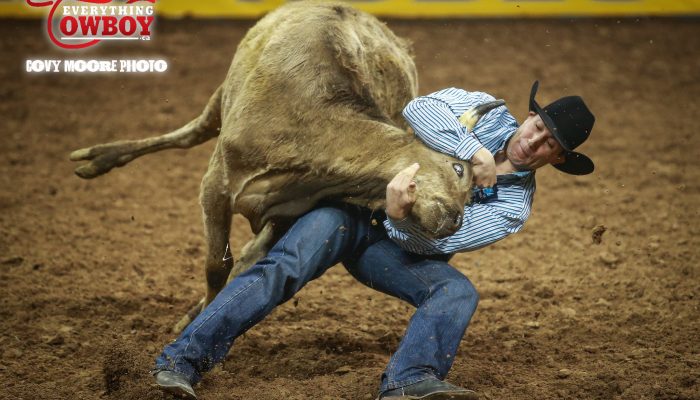 Scott Guenther takes second place in Round 10 of the Wrangler NFR on December 16th, 2017. Photo by Covy Moore.

LAS VEGAS — Nine Canadians made the trek to Southern Nevada for the 59th edition of the Wrangler National Finals Rodeo.

Leading the way would be first-time qualifier Scott Guenthner of Provost raking in $87,338.

Guenthner’s week would begin slow however he remained consistent throughout to end up in the No.5 spot in the aggregate for a check worth $22,846. In the tenth and final Round Guenthner did as he said he would after the Round 9 win, taking second with a time of 3.6 seconds for $20,731 to finish his season in the No.6 spot in the world standings. Mississippi bulldogger Tyler Pearson would claim the gold buckle.

Bull rider Jordan Hansen was Canada’s first contestant in the event since the year 2001. The Okotoks athlete brings home $84,038 after a sixth place finish in the Wrangler NFR aggregate standings to finish the season in the No.8 spot. Hansen would go 4-for-10 in an event that would be won on seven bulls by the now four-time PRCA World Champion Bull Rider Sage Kimzey.

Third in money won for Canada would be Airdrie’s Jake Vold. The three-time Canadian Champion would be injured in Round 8 and removed from competition in the final two rounds. Vold was leading the aggregate heading into Round 8 but was devastated by a dislocated kneecap that will likely sideline him for three months. Despite attempting three less horses, Vold still makes out of the Thomas & Mack Centre with $83,545 in earnings finishing No.7 in the world standings. Iowa’s Tim O’Connell would win his second consecutive world title crushing the competition by over $100,000 at $371,416 for the campaign.

Big Valley’s Zeke Thurston claimed the world championship in 2016 but would finish 2017 in the No.7 spot at $199,917 on the season after a frustrating finals. Thurston would catch the flu while in Las Vegas and top $29,462 in earnings, placing in two of ten rounds. Layton Green’s inaugural trip to Sin City would pay him $45,679 and he would end the season in the No.9 spot in the world while Nanton’s Clay Elliott earned two checks for $32,423 and the No.14 spot overall. A fourth member of Utah’s Wright family of bronc riders would win the gold buckle at 19 years of age, that name? Ryder Wright.

Also a world champion in 2016, Jeremy Buhler of Arrowwood would earn $30,096 placing in two rounds to finish in the No.15 spot.

Canadian contestants would win a total of five go-round buckles while five more rounds would be won on stock from North of the 49th. A total of $349,321 was earned on the back of Canadian bucking horses and bulls.

Other PRCA World Champions for 2017 include Brazil’s Marcos Costa in the tie-down roping; California’s Nellie Miller in the barrel racing and Arizona team ropers Erich Rogers and Cory Petska.