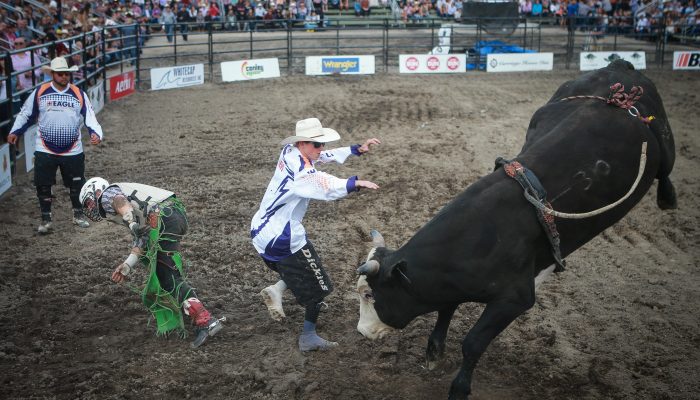 Levi Hale takes the heat off Brady Sims at the Ranchman’s PBR in the summer of 2016. Photo by Covy Moore.

Levi Hale understands the dangers that come with being a bullfighter.

Hale is the third generation of his family to tackle the tasks of protecting bull riders. His father was a professional bullfighter for 15 years, and his grandfather did it before that.

“My grandfather was the first Canadian bullfighter to sign a contract with the Calgary Stampede,” said Hale of Bassano, Alta. “But he broke his neck before and never got to fight there.”

Injuries come with bullfighting. After all, these men put their bodies between the animals and their intended targets. Broken bones, sprained ligaments and other ailments just come with the job.

“I got hooked up with Geoff Turnquist with Supplemental Insurance a couple of years ago, and he’s helped me a lot,” Hale said. “He helped me understand the process of everything. Having the right supplemental insurance puts my mind at ease when I’m working, knowing that if I get hurt, I’ll still be able to pay my bills.

“I was nervous about the claim process. I thought I might screw up the paperwork, but Geoff walked me through it. I was very surprised at how fast and painless the whole process was.”

Hale has invested in full coverage for accidental and illness. That should help if he ever has to take time away from the job because of an incident happening in the arena.

“I’ve got a little girl and a fiancé, and I’ve got to have things to work so I can support my family,” he said. “By teaming with Supplemental Insurance, I’m able to concentrate on my job.”

And it’s a dangerous job. Bucking bulls weigh anywhere from 1,400 to 2,000 pounds, and the best ones can buck, spin and kick all in one motion. When a bull rider goes down, the bullfighters step in, divert the animal’s attention and try to keep everyone in the arena out of harm’s way.

“I’m there to put my body on the line for the bull riders,” said Hale, who works about two dozen events a year. “There are times I don’t have much of a choice; if there’s a shot, I’ve got to take it. Unless you’re super lucky, you’re going to get hurt.”

He hopes that won’t happen, but he’s prepared when it does.

“In August 2016, I smashed my nose at the Curtis Glencross Roughstock event in Red Deer, Alta.,” he said. “I had a shattered nose and four stitches. I figured I would get a little bit of money, but I couldn’t believe it when I received a cheque for $5,500.”