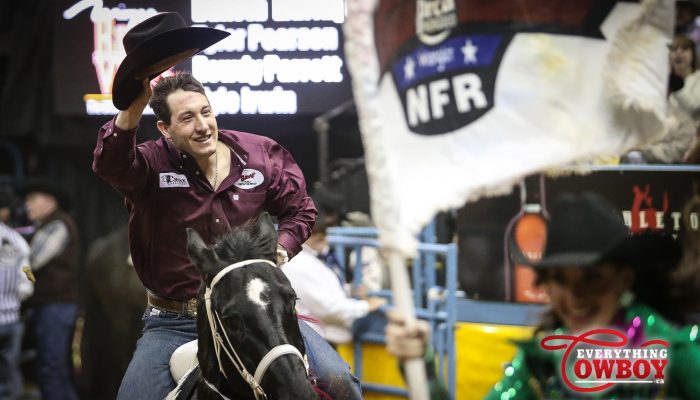 Guenthner wins Round 9 of Wrangler NFR

LAS VEGAS — On consecutive nights, Canada’s Jordan Hansen and Scott Guenthner have won their first round titles at the Wrangler National Finals Rodeo.

On Thursday, Hansen won Round 8 in the bull riding to become the first Canadian to win a round since the year 2000. On Friday, Guenthner earned the third buckle for Canada in the steer wrestling in nine rounds.

Better yet? The Provost product clocked a time within a tenth of a second of the arena record.

“I’m pretty pumped,” Guenthner, who posted a time of 3.3 seconds, said. “This was a very tough round of bulldogging and it seemed like every guy was going faster. I had a steer that was a runner and I knew I would have to get a good start and I got a great start and the steer was good on the ground. I’m in awe that I won this round. This is really cool and something I will never, ever forget.”

Coming in ranking No.5 in the world standings, Guenthner started the week riding his horse Itsy but made a change in Round 8.

“I have been riding Tom Lewis’ horse, Maverick, the last two rounds,” Guenthner said. “I decided to change things up and ride Maverick and it worked very well for me.”

With one round to go having earned $43,762 USD in Vegas, Guenthner ranks No.6 in the aggregate and No.8 in the world standings.

“This week was a little bit frustrating for me, but it feels great to get this win. Now, I’m just going to go after it again in Round 10. I have nothing to lose and I would love to win again and get another ($26,000).”

Speaking to that quick round of steer wrestling, Cochrane’s Tanner Milan would post a time of four seconds flat but ended the night out of the money in not seventh but eight place. Three times of 3.7 split fourth through sixth. Milan held steady in the aggregate at No.8 and is now in the No.5 spot in the world standings.

Arrowwood’s Jeremy Buhler would earn his second cheque of the week in Round 9 with header Tom Richards of Arizona. Tom and Jerry would rope their steer in a time of 4.1 seconds for fifth place and $6,769 a man. Buhler is now less than $2,000 from crossing the $100,000 mark on the season as the No.15 heeler in the world.

The remaining members of Team Canada would all be shut out in Round 9 receiving no scores via disqualifications or buckoffs. Orin Larsen, Zeke Thurston, Layton Green, Clay Elliott are now all out of the aggregate races in their respective events.

The tenth and final round of the 2017 edition of the Wrangler National Finals Rodeo takes place on Saturday December 16th beginning at 6:45pm Pacific.