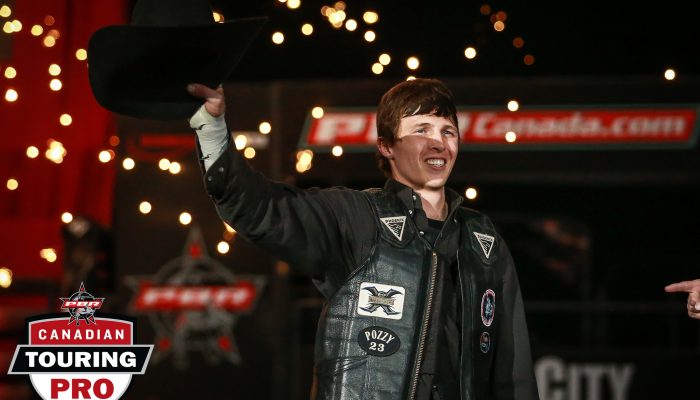 Green Holds on for Win in Lethbridge

LETHBRIDGE, Alberta – Garrett Green (Meeting Creek, Alberta) used a 2-for-2 performance, in front of a near-capacity crowd on Friday night, to win the Bridge City Chrysler/LA Towing PBR Challenge at the Enmax Centre.

Riding on the first night of the two-day event, Green’s lead propelled him to the win Saturday night, earning him $5,533.50 and 60 world points.

On Friday, Green put up 78.5 points on Fat Stacks (Braithwaite Ranches) in Round 1, followed by an 86.5-point effort on Mish Mash (Vold Rodeo/Prescott) in the Championship Round.

In 2017, the 26-year-old’s lone victory came at the Marwayne Touring Pro Division event, leading him to finish the season ranked No.24 in the PBR Canada national standings. Green now leaves Lethbridge, the No.1 man in the 2018 standings.

Second overall was Cody Coverchuk (Meadow Lake, Saskatchewan) with the only other 2-for-2 performance, also from Friday night. Coverchuk rode Paint the Town (Skori Bucking Bulls) for 81 points in Round 1 and added an 82.5-point effort on Smiling Bob (Wild Hoggs Bucking Bulls) in the Championship Round.

In the past two seasons Coverchuk has finished No. 3 and No. 5 in PBR Canada standings at the conclusion of the year. His finish in Lethbridge earned him $3,748.50 and 30 world points.

Wacey Finkbeiner (Ponoka, Alberta) and Brock Radford (DeWinton, Alberta) tied for third place having both gone 1-for-2 on Day 1. Finkbeiner rode Pennywise (X6 Ranch) for 86.5 points in Round 1 but was bucked off Midnight Rain (X6 Ranch) in 3.32 seconds in the Championship Round.

Radford, who won a historic four consecutive Touring Pro Division events in 2017, used a re-ride on Hookasaurus (Wild Hoggs Bucking Bulls) to match Finkbeiner in Round 1, but was then bucked off Catch My Drift (Two Bit Bucking Bulls) in 2.17 seconds in the event’s final round of the night. For their efforts, the two men earned $2,498.99 and 17.5 world points each.

Double entered, Wyatt Covington (Omak, Washington) tied himself for the fifth place finish. Covington rode Street Legal (Cody Strandquist Bucking Bulls) for 86 points in Round 1 and bucked off Corona Time (Vold Rodeo/Prescott) in 1.72 seconds in the Championship Round on Friday.

Notably, Aaron Roy (Yellow Grass, Saskatchewan) finished fourteenth in his return to PBR competition. Roy put up 81.5 points on Big Deal (Cody Strandquist Bucking Bulls) in Round 1 but was bucked off Tykro Checkered Flags (Wild Hoggs Bucking Bulls) in 6.44 seconds in the Championship Round on Friday.

Next up on the 2018 PBR Canada schedule is the Touring Pro Division event in Teepee Creek, Alberta on March 10. Following, PBR Canada’s Monster Energy Tour begins its third season in Calgary, Alberta on March 24. Tickets are on sale now at Ticketmaster.ca