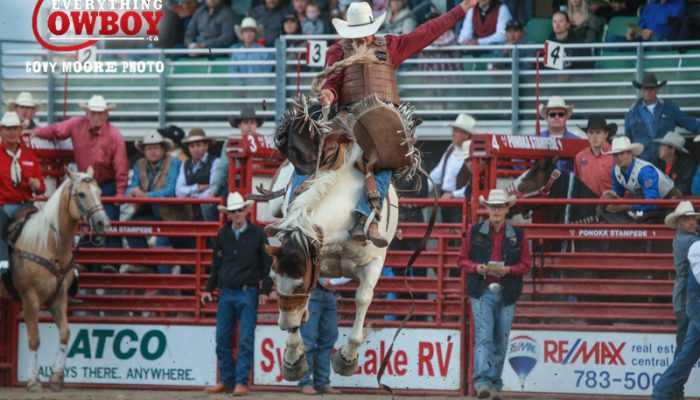 NANTON, Alberta – The first time he competed at the College National Finals Rodeo, Clay Elliott won the national championship. That was in 2015.

The first time he competed in the open bronc riding at the Canadian Finals Rodeo, Elliott won the Canadian title. That was just a couple weeks ago.

Now he’s ready for his first Wrangler National Finals Rodeo, and he has a theme. First he must take care of business during the sport’s grand championship, which takes place Dec. 1-10 in Las Vegas.

“It’s a lifetime goal to make it to the NFR,” said Elliott, who was raised in Vernon, British Columbia, and now lives in Nanton. “As I’m accomplishing more things, my goals get higher. I will never be content. I’ve accomplished what I’ve accomplished, but next is going to the NFR. From there, it would be winning the average and the world title.

“The number of world titles is unlimited, but I’d like to break some records. You can’t be content; there’s always something more.”

It’s a competitive spirit that has guided Elliott through his young career. He just put the wraps on a championship run during the CFR in Edmonton, Alberta, where he added $42,978 to run away the title with $70,686 in year-end earnings. Not bad for the 22-year-old cowboy, who actually qualified for the CFR three other times: twice in the steer riding and once in the novice saddle bronc riding.

It was the perfect precursor to Las Vegas, where go-round winners will pocket more than $26,000 a night for 10 rounds. It’s a great chance to cash in, but more importantly, it’s the way to the gold buckle. In rodeo, dollars equal points, so the contestants in each event with the most money earned at the season’s conclusion will be crowned world champions.

Elliott heads into the NFR with $80,048 in ProRodeo earnings. He is eighth in the world standings. Even though he’s more than $92,000 behind the leader, reigning world champion Jacobs Crawley, ground can be made up in a hurry in Las Vegas, especially with the way Elliott has ridden this year.

“I probably placed at 75 percent of the rodeos I went to,” said Elliott, who credits part of his success to the support of his sponsors: C5 Rodeo, The Horse Park, Good Time Party Rentals, Wrangler and Oklahoma Panhandle State University, the school for which he won the college title. “I knew I had to make the good horses look good and make the bad horses look better. It didn’t matter what I got on all year, I tried to make that horse have the best possible trip.”

The secret is in the basics of bronc riding. Cowboys must start their rides with the spurs over the breaks of the horse’s shoulders, then spur in rhythm with the animal’s bucking and kicking action. For the top cowboys in the game, the beginning of that spur stroke can set the tone and actually help the bronc.

“My consistency level was higher than it was last year, and that was the difference,” he said.

Elliott finished the 2015 campaign 17th in the world standings, just missing the NFR; only the top 15 contestants on the money list in each event at the conclusion of the regular season advance to the finale.

“Things just started clicking midway through last year,” he said. “As the year went on, it kept getting better. Halfway through the year, I realized I had an opportunity. I hadn’t made that a goal. But after experiencing that, I dang sure knew what it took. It gave me a better understanding of what I needed to do. It was just building blocks to something better.”

Those blocks first started being built years ago. His family has been around the game since before he was born.

“My dad rode bulls, my brother rode bulls and my whole family roped,” Elliott said. “My family had a Western store, and my dad makes hats. My dad stays in touch with rodeo cowboys, and I really didn’t have any other thing I wanted to do.”

Family is a vital cog in the machine that is Clay Elliott. His mom died five years ago, but he carries her legacy with him in every spur ride and every trip to the pay window.

“Family is the most important thing in my life,” he said. “My dad’s been nothing but supportive and put me around people that knew how to ride broncs. He’s what you’d want in a dad. My brother had success in rodeo. He gave me a path to follow. I have nothing but the best as far as my family goes.”

He got on his first bronc at age 16, then decided to further his education at Panhandle State, which is well known for training some of the best bronc riders in the game; the school boasts of bronc riding world champions Robert Etbauer (now the rodeo coach), Tom Reeves, Jeffrey Willert, Taos Muncy and Spencer Wright.

“I chose Panhandle State because I wanted to learn how to ride bucking horses,” Elliott said. “That’s how simple it is. I knew the school was good. I knew I could accomplish what I wanted to academically. As far as a bronc riding school, there’s really nothing even close.”

That education has paid off quite well, but he also got lessons by a couple of NFR veterans with whom he traveled this year in Chet Johnson and Tyler Corrington. The three of them were joined by rookie Audy Reed, and it made for quite a foursome on the road.

“It was the perfect mix of guys,” Elliott said. “Chet and Tyler had the experience, knowing the ins and outs of rodeo and how to handle winning and losing. You spend a lot of time with those guys that you pick things up.

“With this being Audy’s rookie year, he’s just motivated. He loves to ride bucking horses as much as I do. We had the drive that was beneficial to Chet and Tyler. I think we helped each other without even knowing. Just the atmosphere in the rig was fun. It was very professional.”

It helped Elliott accomplish great things this season. In addition to making the NFR and winning the Canadian title, he also earned the $50,000 prize for winning RodeoHouston, an event that doesn’t count toward the world standings; still that money was a big step in allowing the Albertan a shot at chasing his gold buckle dreams.

But so did his run in Edmonton in mid-November.

“I’m very glad to have a Canadian title under my belt,” he said. “It gave me an opportunity to get on some bucking horses and feel good going into the finals. On the other hand, rodeo’s a short-term memory. It doesn’t matter what I did yesterday or what I did last year. It’s a new page. For me, I’m not going to take it with me. I’ll remember it, but I still have to prove on my next horse that I can do it.

That love has him in the right place at the right time.