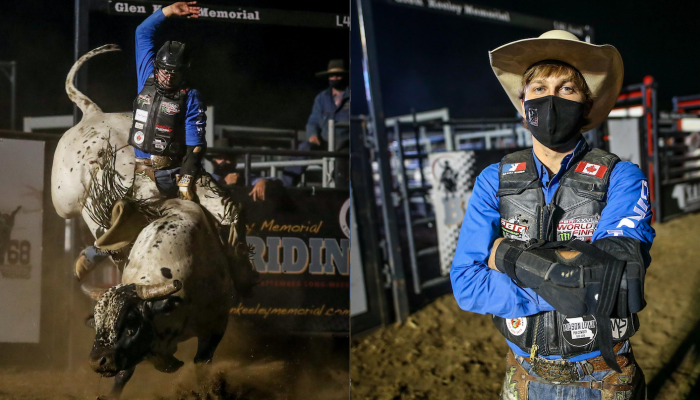 Once again covering Tykro Pound Sand in the championship round, Buttar expands lead atop national standings, now 99.5 points ahead of No. 2 Brock Radford

STAVELY, Alta. – Marking the eighth PBR (Professional Bull Riders) Canada event of the 2020 season, on Saturday night all eyes were on the L4L Arena as action got underway for the prestigious Glen Keeley Memorial, part of the nation’s Touring Pro Division.

In form that has been seen twice prior this season, the event was determined by a showdown of titans, as Dakota Buttar (Kindersley, Saskatchewan) covered two-time PBR World Finals selection Tykro Pound Sand (Wild Hoggs/Corey Chmelnyk) for a monstrous 90.5 points en route to the event win.

With the first selection in the championship round draft, Buttar architected a rematch with Tykro Pound Sand.

A storied rivalry, the 27-year-old had attempted the powerful bovine athlete three times prior, with their two most recent showdowns yielding massive scores and event wins for Buttar. First teaming in 2020 for an 87.5-point score at the Monster Energy Tour season-launch in Calgary, Buttar then went the distance aboard the bovine athlete in Lethbridge, Alberta for 86 points, propelled to the event victory in both cities.

Remaining perfect against Tykro Pound Sand, Buttar was scored a monstrous 90.5 points inside Stavely Arena. The 8-second effort marked his first 90-point ride of the season, and fourth of his career across all levels of competition.

Furthering his stronghold on the No. 1 ranking in the PBR Canada national standings, Buttar, who also earned a pay cheque for $3,478.20, collected a crucial 32 national points to expand his lead over No. 2 Brock Radford (De Winton, Alberta) to 99.5 points.

Radford also competed at the Touring Pro Division event in his home province, however was dispatched by Beer Buzz (Wilson Rodeo) in a swift 3.19 seconds in Round 1.

The three-time Team Canada rider’s runner-up effort was backed by an 85-point effort on Thunder Road (Eno Bucking Bulls) in Round 1, followed by an 88-point score aboard Hanna Motors Homeboy (Skori Bucking Bulls) in the championship round.

Biever is now the No. 5-ranked rider in the PBR Canada national standings, 180.5 points behind No. 1 Buttar.

Rounding out the Top 5 was two-time PBR Canada Champion Zane Lambert (Ponoka, Alberta). He covered Allie’s Wish (Wild Hoggs Bucking Bulls) for 86 points in Round 1 to earn $691.90 and 6 national points.

Seeking his record-tying third national title, Lambert is now No. 7 in the nation, 183 points behind the No. 1 ranking.

In the bull pen, Power Dozer (Skori Bucking Bulls) was the high-marked bull of the event, posting a dominant 46-point score after bucking off Shay Marks (Sunnybrook, Alberta) in 2.89 seconds in the championship round.