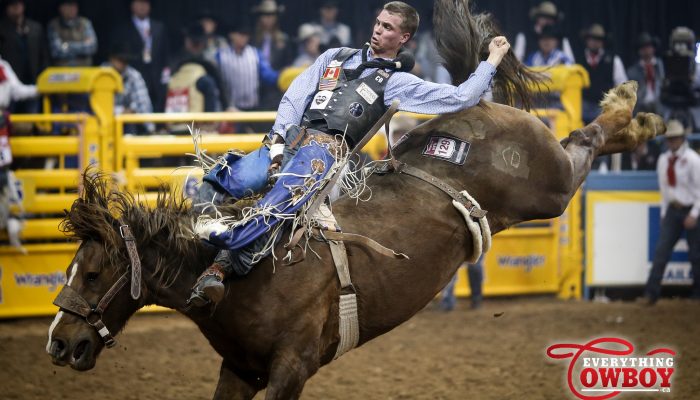 CPRA and PRCA Seasons Come to a Close

As the curtain rang down on both the CPRA and PRCA regular seasons, there was the expected drama—for some the sweet smell of success and for others the agony of the near-miss as Finals hopes were either confirmed or dashed. And for still others, it was business as usual as they cruised to the finish line with their plans already in place for post-season dates in Red Deer, Las Vegas… or both.

A couple of cowboys who are in that latter category are team ropers Tristin Woolsey and Denver Johnson who will make their first appearance at the Canadian Finals Rodeo. From their first win at Rocky Mountain House in June followed by a string of strong placings, including wins at Wainwright and the Ponoka Stampede, the pair—Woolsey the heeler from Nanton, Johnson the header from Strathmore—were virtually an unstoppable force. They rolled to the top of the season leaderboard early and stayed there to the end where they fittingly captured one more title at the season finale—the Hanna Indoor Pro Rodeo.

“We were both looking for someone to rope with at the start of the season,” Woolsey recalled, “and we’d high-school-rodeoed before so we talked about it and decided to give it a try.”

The success of the pairing didn’t really surprise Woolsey. “Our styles really fit each other. He likes to reach and he makes the heeling pretty easy.” And it’s not just their roping styles that mesh. “Denver’s pretty laid back,” Woolsey noted. “Nothing much really gets to him and I’m pretty much the same way.”

Clearly it’s a chemistry that works for the young duo and one they hope they can carry into the CFR and beyond as their plans include spending some of the winter in Arizona and entering rodeos down there in 2019. Woolsey, the second generation hand, will be riding Harry, the 14 year-old gelding he’s been riding for a decade. Harry was recently selected as 2018 Canadian Heeling Horse of the Year.

It was a different story in the bull riding where Maple Creek, Saskatchewan cowboy, Jared Parsonage, needed a big performance on the final weekend of the season to claim his first season leader title. Parsonage was the only man to cover both his bulls at the Grass Roots Final, then iced his claim to season supremacy with a 1-2 split at Hanna.

For several competitors it came down to the last rope thrown, steer bull-dogged or horse or bull ridden to decide their CFR fate. In the steer wrestling, where it had been a dogfight all year, it was the brothers Frank who moved from outside the top twelve to grab the final two qualifying berths with brilliant performances at the Grass Roots Final. But even then it wasn’t over as Chauvin bulldogger, Layne Delemont’s valiant effort at Hanna came up just short. Delemont twisted his steer in 4.0 seconds for a third place cheque of $839 but when Dallas, the elder of the Franks, managed a 4.2 for a fourth place Hanna cheque, the deal was sealed and Delemont was left just $22.00 shy of his first trip to the CFR.

Another last gasp change came in the team roping where Jeremy Buhler, the 2016 world champ and 2017 Canadian champion had to place at Hanna to grab a spot on the CFR roster. Alongside unflappable partner, Levi Simpson, who had already punched his ticket to the CFR, Buhler nailed a 4.9 second run for a second place cheque and a chance for him and Simpson to defend their hard-earned Canadian title of a year ago. The move by Buhler left Wyatt Eirikson on the outside looking in despite Eirikson’s solid effort at the Grass Roots Final.

And in the bull riding, Calgary’s Nick Tetz saw his grip on a CFR spot loosened at the Grass Roots event but split 1-2 with Parsonage to climb back into the standings and confirm his Red Deer travel plans.

Six Canadians will make their way to Las Vegas to represent their country at the 60th Anniversary edition of the Wrangler National Finals Rodeo.