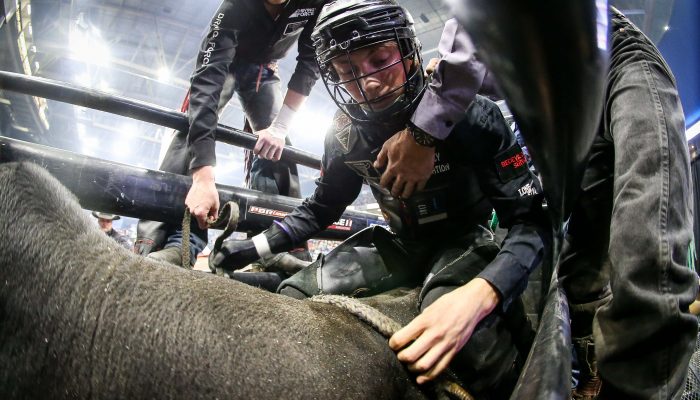 CAMROSE, Alberta — On Saturday night in Camrose, Alberta the recreation centre was completely packed with viewers excited to watch the first PBR Canada event on the season. More specifically, excited to watch hometown cowboy Coy Robbins. Not only did Coy help put together the this PBR Canada event in his hometown, he walked away with the championship. Coy Robbins was two for two on his bulls, ending him with the highest point total at 167. Here’s his ride from the Championship Round on Winston Bruce from the Skori’s at 86.5 points.

The crowd was loud and proud each time Coy’s name was announced which contributed to his confidence going into his rides. Watch the interview below to see what Coy had to say about putting on the event for his hometown and how he felt during the evening.

This year’s PBR Canada coverage is brought to you by COWBOY SH*T. Check out the podcast and clothing at CowboyShit.ca

The evening was lined up with some of the toughest bull riders in Canada and a pen full of rank bulls. Not far behind Coy in the average was Nick Tetz with an average score of 166. Tetz ended up riding five bulls at this PBR Canada event after being an 85 and an 82.5 in the long-go and an 81 in the short go, even dealing with a couple re-rides. Tetz and Robbins were the only successful riders in the short-go for the evening, putting them neck and neck in the average.

The cowboys will be headed to Red Deer, Alberta for the next PBR apart of the Canada Cup Series where they will battle for another championship.