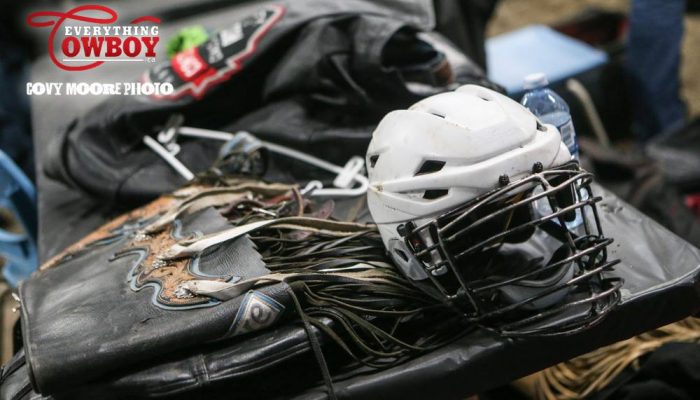 It’s been a year since the last time Adam Jamison got on a bucking bull during a professional rodeo.

Jamison, a veteran bull rider, has been on the sidelines since he began to feel some concussion-like symptoms in January at San Antonio last year.

“I had a wreck on my horse, landing on the back of my neck and giving my head a rattle. Something I didn’t think twice about. Two weeks later I head down south, was having a really good run when I started to notice after each bull I got on, symptoms started to arise,” recalled the Kiwi rider.

“After falling off a bull in Jackson and by no means hitting my head, I was packing my bag and noticed I was dizzy. I returned to San Antonio a couple days before semi finals and began to notice my balance was off and had new sensitivity to lights and noise.”

The bull rider decided to talk to the sports med team about his symptoms and upon hearing his story they advised him to return home.

“It wasn’t until I came home that I realized how bad my symptoms were,” he said.

Since then, Jamison has been struggling against those symptoms as he fights to make his return to the rodeo arena. 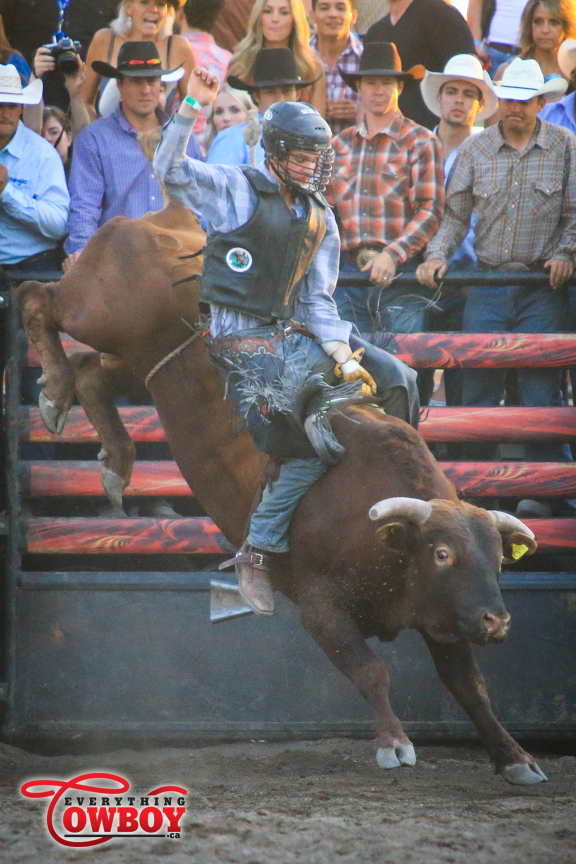 But since the death of fellow bull rider Ty Pozzobon at the age of 25, Jamison has been taking a lot more care about deciding when he’ll eventually return to riding bulls.

“It’s a tough situation, especially with the recent events a guy thinks a little more on it. Talking to the doctor they say that if you hit your head again your symptoms can come back and be just as bad and worse and longer,” he said.

“I’ve decided that I’m going to just get back to where I’m 100 percent and if I feel like riding bulls then I’ll ride bulls.”

He noted that after a year of recovery he’s been feeling better and is back riding his horse and working out.

San Antonio wasn’t the first time Jamison has suffered from a concussion. In fact, over the past four years he said he’s had around five concussions with various degrees of seriousness.

Of those, one took him out a month and another sidelined him for a couple of weeks.

“There was another one that I maybe should have taken a couple of weeks off but a guy’s trying to make the CFR so I decided to go,” he recalled of one concussion he suffered a couple of years ago.

He noted that there wasn’t any strong outside pressure for him to start riding again, but his desire to be at CFR contributed to his decision to come back early.

“I just wanted to be at CFR so I decided to go.”

That kind of mentality isn’t uncommon in rodeo cowboys.

“In any sport. I don’t think it’s just rodeo. I don’t care if you’re a hockey player or whoever you are. No sports athlete wants to be not doing what they love and it truly is something that we all love to do,” said the veteran cowboy.

According to Lait, in the old days a concussion was just a bump on the head that you could shake off.

“Before you didn’t even really treat ‘em like an injury. A concussion was more like ‘oh you got a bump on the head,” he said adding that as he’s learned more about concussions, he’s begun to realize that even in his own career he could have taken some more time off to recover from bumps to the head.

Lait, 33, said he initially thought his symptoms began after taking a hit to the head at the CFR in 2015, but after working with doctors he can point to a number of different signs that he may not of recognized that began even earlier.

“My wife would notice it more than I would. My wife would tell me that the last couple of years come September time I wouldn’t be able to find my thoughts as well. Those were just little signs that we maybe are just picking up on now. The signs after my last two more serious concussions and even now the loss or searching for words sometimes when I get into conversations; that battle seems to creep up. Immediately after I had blurred vision, a lot of what I would call your typical symptoms like headaches,” Lait recalled, noting that long term he started to notice other changes, too. 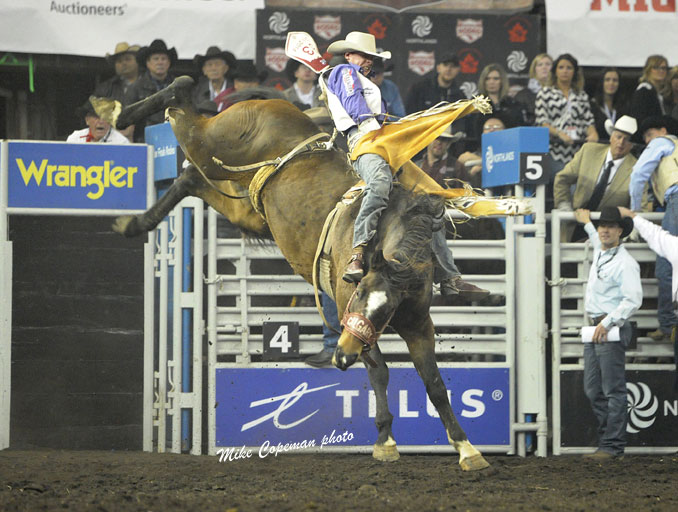 He started to notice things such as a little bit of depression, a loss of drive and mood swings, accompanied by the continued battle to find his thoughts from time to time.

“I wouldn’t have a real short temper but something that normally wouldn’t anger me I would get frustrated and angry.”

Lait said he wanted to stress to young cowboys the importance of taking time off to let any injury properly heal, especially in the case of concussions.

“I would consider myself after the CFR in 2015. You know I took two months off. Thought things were great. Six horses back into that season I get a concussion that essentially takes me out for an entire summer and now it’s going to lead to me probably being done. You have to think about the big picture,” he said.

One of the barriers standing between many rodeo competitors and the ability to actually take the time off to heal up from injuries is financial problems. If you’re not riding, you’re not making money.

“It contributes 100 percent to it. Things that we’ve been looking at trying to implement are different ways to get funding for guys that are out with concussions. There’s the Benevolent Foundation money that they can utilize for if they get injured no matter what whether it is a concussion or whether it’s a knee injury or whatever. There’s different ways around getting funding for stuff like that but that is a big play in it for sure,” said Brandon Thome of the Canadian Pro Rodeo Sports Medicine Team.

There are also a few organizations that are popping up to help ease at least the financial burden a cowboy can face when taking time off due to a concussion.

Causes such as the newly formed Ty Pozzobon Foundation and Paul Brandt’s the Black Hat That Does Good Things initiative with Smithbilt Hats help to raise funds to benefit cowboys who are forced to sit out a large chunk of the rodeo season due to a concussion.

Lait said rodeo competitors shouldn’t hesitate to take advantage of those causes or to see a doctor if they aren’t feeling right.

And many rodeo cowboys are beginning to heed that call.

“It has been changing for sure. I mean you still get some hard-headed guys but I mean obviously, the culture has changed with the likes of guys like Curtis Andersen pushing the education side of what can happen post head injury,” said Thome when asked about the culture around concussions in the rodeo world.

According to Thome, educating cowboys about the effects and symptoms of concussions is going to be extremely important, especially because right now the Canadian Pro Rodeo Sports Medicine Team does not have the authority to pull a cowboy from competition if they suspect a concussion.

Instead, the final decision on whether to continue riding rests with the cowboy.

Thome, a certified Athletic Therapist, said detection of a concussion in the moments immediately after a head hit can be difficult because many of the signs and symptoms aren’t visible to medical personnel.

“It’s very subjective and very objective at times,” he said.

For example, things like a cowboy holding his head and staggering after taking a hit can be a sign that something is wrong, as can changes in a cowboy’s personality and mood swings.

But the latter two symptoms only become apparent if you know a cowboy well, something that the Sports Medicine Team can struggle with sometimes.

“If you don’t talk to somebody or you don’t know who they are it’s tough to tell whether they have a change in personality,” Thome said.

That’s where it becomes helpful for competitors to be able to identify those changes in personality in themselves or their travelling partners.

“Nobody’s ever going to be around the entire time. I hope that it happens but at the end of the day they need to start being accountable for each other. If your travelling partner’s not right, convincing him to not get on instead of convincing him to get on,” Thome said before quoting something Dustin Flundra said at the recent CPRA AGM.

“’Sometimes being tough is making the right decision.’”

While there are a few signs of a concussion that can be seen by other people, some symptoms such as headache, nausea and sensitivity to light can only be reported by the cowboy and can be easily hidden.

“The hard part about concussions is if it’s very non-symptomatic – where they just have a headache, maybe they’re sensitive to light – you can hide them very easily,” Thome said. noting that those symptoms are part what makes giving the Sports Med team the ability to pull cowboys from competition difficult.

“The tough part about making it mandatory, which a lot of people – me included – think is necessary, the hard part about that is they can start to hide. They can start to hide their symptoms because they don’t want to be pulled,” he said, noting that he sometimes sees similar behaviour in hockey players, where medical staff do have the ability to end a player’s day if they suspect a concussion.

Thome said that’s why it’s important for the Canadian Sports Medicine team to be at as many CPRA Rodeos as possible so they can form the relationships necessary to talk a competitor out of climbing on if they’re not feeling up to it.

“Right now the way that it stands with the fact that we can’t pull anybody, I feel like building relationships with the guys becomes a lot more important because now we can convince them to not ride instead of tell them they can’t.”

Still, a cowboy who is suffering from a recent concussion or hit to the head isn’t always in the right state of mind to make a decision that could have potentially life-altering consequences.

“At the end of the day if they can’t make the decision for themselves somebody has to.”

Lait stressed the importance of having good core body strength and not rushing into the sport at a young age to aspiring rodeo athletes.

“A lot of guys try to do so much at a really young age before their bodies are really developed. I hear of so many kids just want to keep pushing themselves, which is fine. But we all have to remember development of muscle. The stronger you can really be, and especially in such a physically demanding sport such as rodeo strength is such a key to staying healthy and the younger you get into it, essentially what’s going to happen is the younger you’re going to be done,” he said, adding that for older cowboys, having the strength to ask for help is also extremely important.

“Don’t be afraid to get help if you need it. Everybody wants to be the tough guy. I’m the first one to admit that nobody wants to be seen as weak in any sport and especially with cowboys. You’re a rough, tough individual. But you can still be rough and tough and smart.”