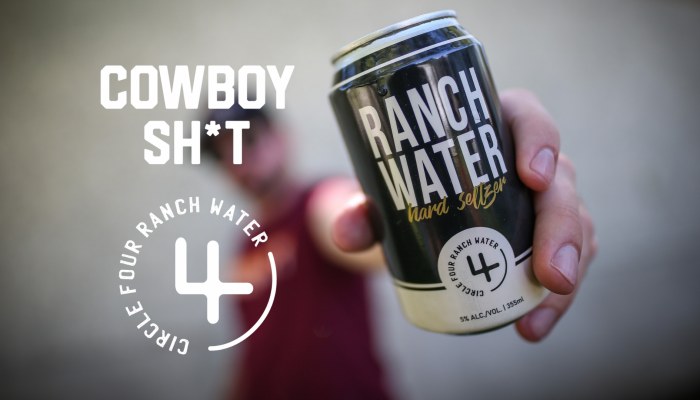 CALGARY, Alberta — Cowboy Sh*t the Podcast and Circle 4 Ranch Water are proud to announce a four-episode initial sponsorship agreement commencing on June 16th with Episode No. 93 of the podcast, now in its fourth season.

The podcast, Cowboy Sh*t, powered by Circle 4 Ranch Water for this four-episode run is hosted by former bull riders Ted Stovin and Wacey Anderson covering topics all across western sports and the western lifestyle. Previous guests have included Hockey Night in Canada’s Ron MacLean; the PBR’s exclusive entertainer Flint Rasmussen; Blue Collar Comedy Tour favorite and the voice of Mater from the Cars franchise in comedian Larry the Cable Guy along with country and western artists Colter Wall, Corb Lund and Ned LeDoux.

Circle 4 Ranch Water was founded in 2020 by Courtney Todd. Todd hails from Jenner, Alberta, and trademarked the popular seltzer in Canada. Circle 4 Beverage Co. began canning Ranch Water and marketing the hard seltzer across Canada themselves. Circle 4 Ranch Water is made up of only four ingredients; carbonated spring water, tequila, lime, and 100% organic agave.

Ranch Water, as it’s known, is new in Alberta and Canada but has long been a West Texas staple. Often referred to as Marfa Water, it originated in the area of Marfa, Texas by a working cowboy in the late 1960’s. Originally a bottle of Topo Chico mineral water with a shot of tequila and squeeze of lime, this unofficial drink of West Texas dive bars and house parties carries some Texas-sized fables. It’s the perfect refreshing drink after a hot day of work on the ranch. Todd’s Circle 4 branded Ranch Water is blended and packaged in Calgary and Medicine Hat, and distributed across Alberta and Saskatchewan, growing to other provinces in the near future, and is now in over 100 locations.

“We wanted to bring the quality hard seltzer Ranch Water to the Canadian market with the convenience of a can that can travel with you, to be enjoyed by everyone from working cowboys to golfers to gardeners,” said Todd. “Wacey reached out and after seeing the success of the show, catching up on a few episodes and coming across the encompassing merchandise we thought working with Cowboy Sh*t was a perfect fit.”

“My pal Kane Larsen brought a pack of Circle 4 Ranch Waters over the other day and I was hooked,” Anderson, who’s taking the lead on partnerships for the brand, said. “Kane’s fiancé Riley Swanby was connected to Courtney through a friend and by the end of the week we had connected and made this initial deal.”

“I’m proud of Wacey for bringing this partnership together and looking forward to many more,” Stovin added. “We have both worked hard over the past four and a half years on Cowboy Sh*t, only missing one Wednesday since we started 92 shows ago. It takes dedication and commitment to continue to deliver a professional product every other week. It’s constant planning and research but all worthwhile when we hear back from listeners that appreciate it.

“I am thankful for our team and can’t leave out editor Shaun Morton, photographer Covy Moore or my better half Storm Dafoe for all her hard work. What a better way to kick off summer and celebrate re-opening than with this new partnership with Circle 4 Ranch Water.”

The partnership includes title sponsorship and commercial reads of the next four shows along with additional support from the Cowboy Sh*t and Everything Cowboy assets on social media.

Circle 4 Ranch Water is to be enjoyed responsibly by those of legal drinking age.

About Circle 4 Ranch Water: Circle 4 Beverage Co. is a family owned business, mixing only real ingredients, with the best water. This is the hard seltzer you’ve been looking for.

About Cowboy Sh*t: Started in 2017 by hosts and western lifestyle personalities Ted Stovin and Wacey Anderson, Cowboy Sh*t the podcast engages in-depth conversation, analysis and interviews with the best in the business. (Need a better line). Cowboy Sh*t merchandise, beginning in July of 2020 can now be found in western stores from Vernon, British Columbia to Winnipeg, Manitoba and everywhere in between. Cowboy Sh*t is a division of Everything Cowboy Inc. founded December 2010. For previous episodes and the full offering of hats, tees, hoodies and more, visit CowboyShit.ca