CALGARY, Alberta — We here at Everything Cowboy Inc. are proud to bring you our podcast, Cowboy Sh*t with Ted and Wacey.

I have wanted to do a podcast now for years but never got around to it for a number of excuses I could come up with. None of them really matter now since the podcast is live and we are rolling.

There are many ways to listen, via the embedded player below and any of the following:

I, Ted Stovin, host the show with room mate and pal Wacey Anderson. In this first episode we introduce ourselves, talk about what the show is going to be about, the current CFR negotiations and have our first guest on the show, Canadian Champion Bull Rider Jordan Hansen.

For Episode No. 3 we talk about Ty Pozzobon and the Ty Pozzobon Foundation with Rusty Clunie, Randy Quartieri and Tanner Byrne.

In the fourth installment of the podcast it’s everything about the 45th Canadian Finals Rodeo. With the news of the move from Edmonton to Red Deer we speak with Jeff Robson of the Canadian Professional Rodeo Association and Ben Antifaiff of Westerner Park for their take.

For the fifth episode we talk Skijordue 2018 with Sam Mitchell and start the first half of a two part conversation with Canadian bullfighting legend, Scott Byrne.

We continue our conversation with Scott Byrne in Episode No. 6 and have a hilarious talk for Valentine’s Day with the one and only Tayla Fraser or Whiskey & Pickle Juice.

In the seventh show we had a huge talk with Canada’s winningest bull rider ever in the PBR, three-time Canadian Champion Aaron Roy. Roy returns to competition in Lethbridge, Alberta on March 2nd.

Wacey and I have our first World Champion on the show in Episode No. 8, it’s Big Valley, Alberta’s Zeke Thurston. He has our best definition yet for Cowboy Shit.

For the tenth show, the first in the double digits we speak with author of The Crazy Game and former NHL goaltender Clint Malarchuk.

We get back to hockey in Episode No. 13 with Stanley Cup Champion, PBR Judge, Chute Boss and Bucking Bull owner Curtis Leschyshyn.

Brandon Thome of the Canadian Pro Rodeo Sports Medicine Team is in studio for Episode No. 14 talking about the Canadian Cowboy Classic Golf Tournament coming up on June 14th among other things.

Episode No. 15 is the first live on location podcast, Wacey and I chat with Slim Wilson ahead of the Cluny Lions Charity Bullarama on July 2nd.

Wacey tries to mend a broken heart during Episode 16 and we have a great conversation with the PBR’s exclusive entertainer and host of Outside the Barrel on Rural Radio Channel 147, the one and only Flint Rasmussen.

In our first of three episodes in August we visit with the manager of Rodeo and Chuckwagon Racing at the Calgary Stampede and former Professional Bullfighter Kynan Vine.

Terry Andryo of ATB Financial joins the show on August 15th to speak sponsorship and bring a different perspective to western sports.

After passing the $1.6 million-dollar mark in money raised, we speak to former Calgary Flame, veteran of over 500 games in the NHL and namesake of the Glencross Charity Roughstock Invitational, Curtis Glencross for our 20th show.

In the show, Ron mentions a story he wrote during the Calgary Stampede which you can read by clicking this highlighted text.

CEO of the Professional Rodeo Cowboys Association (PRCA), George Taylor is our guest for episode No. 23, sponsored by CFR 45 from in Red Deer, Alberta from October 30th to November 4th, for more information visit CFRRedDeer.ca.

CEO of the Professional Bull Rider (PBR) Sean Gleason joins Episode No. 25 live from Las Vegas, Nevada ahead of the 25th edition of the PBR World Finals at the T-Mobile Arena.

To begin Season 2 of Cowboy Sh*t, two-time Canadian Champion saddle bronc rider Clay Elliott joins the show ahead of his third trip to the WNFR. It’s that time of year and Clay tells us a few stories we hope you’ll enjoy.

For the week of December 19th, 2018, Episode No. 2 of Season No. 2, we speak to alt-country singer-songwriter and Southern Alberta’s own, Corb Lund.

He’s a writer, broadcaster, lover of chocolate, wine, horses and libraries, he’s a Cowboy of the Year and has announced every major rodeo in Canada, Mr. David A. Poulsen joins the 31st show to finish off a triple header of episodes in January.

For No. 32, I organize four dates for a bachelor episode for my pal Wacey Anderson. Will Wacey find love? Listen to the show to find out!

The second half of our interview with Ron MacLean is the feature of Episode No. 33.

Episodes No. 34 to 36 are sponsored by the World Champions Rodeo Alliance (WCRA) in a three-part series speaking of the progress after one year changing the game in the rodeo world. For the first segment we visit with WCRA President and guest of our 11th and 12th shows, Bobby Mote.

A man of many talents, Scott Davis, Vice President of the WCRA joins us for Episode No. 35. Former Editor-in-chief at the PBR and communications director at the PRCA, author Kendra Santos joins Episode No. 36

Director of Golf at the Valley Ridge Golf Course, Curtis Robertson, joins the show ahead of the Canadian Cowboy Classic golf tournament in support of the Canadian Pro Rodeo Sports Medicine Team on June 18th at Valley Ridge. For more information visit CanadianCowboyClassic.com

To donate, visit this link >> https://melindagebraad.wixsite.com/thegemsofmazatlan

For Episode No. 41 we visit with Brinson James Harris the son of Hollywood Harris, Brinson has made a name for himself in the western sports world as one of the top entertainers in our business. We had a lot of fun with this show and may have been a tad hungover…

Episode No. 42 we sit down with Canadian bullriding superstar Zane Lambert to tee up the 2019 Calgary Stampede and to share some stories from the road.

Our post Calgary Stampede episode, episode No. 43 we sit down with Canadian Champion Bull Rider and the assistant coach for Team Canada at the upcoming PBR Global cup Tanner Girletz.

For episode No. 44 the boys chat with Lakota Bird, Lakota is a three-time College National Finals Rodeo qualifier and the first woman to win an All-Around title at a Canadian Professional Rodeo.

Episode No. 45 brings us to our interview with Lane Peterson, Lane has been selected seven times to judge the CFR and comes from one of Canada’s legendary stock contracting families.

For episode No. 46 the boys chat with CFR and Calgary Stampede qualifier Craig Weisgerber, lots of laughs were had and even an encounter with a movie star…

Episode No. 47 we are lucky enough to get some time to interview the greatest Bull Rider of all time, Dale Brisby. As well, we get to chat with the man behind the camera Randy Quartieri. You don’t want to miss this one!

For episode No. 48 we chat with the General Manager of the Canadian Professional Rodeo Association Jeff Robson to discuss all things CFR.

Episonde No. 49 brings us a really cool interview with professional bull rider Jared Parsonage, we chat about the current season, as well talk about where Jared got his start.

Episode No. 50! To celebrate this benchmark the boys sit down with Chad Besplug and Don Johansen to break down the list of the Top 10 Bull Riders in Canadian history, you don’t want to miss this one!

For Episode No. 51. The boys speak to Zeke Thurston, Jeremy Buhler, and Levi Simpson during the Canadian Finals Rodeo to talk about their world titles and their 2019 seasons.

For the week of November 20th, 2019, Episode No. 52. brings us to the second episode of our CFR Athlete Hot Stove interviews. This time around Ted Stovin sits down with Stacey Ruzika, Richmond Champion, and Brett Gardiner.

Episode No. 53 is one you don’t want to miss, the boys welcome two-time PBR World Champion Jess Lockwood and the always funny James Foley to the pod. We share some great stories and a lot of laughs!

Episode No. 54, “The Judgecast”, this week the boys chat with longtime PBR Canada Judges Justin Keeley and Bear Lightbown.

Episode No. 56 brings us very a special guest, professional photographer Covy Moore. Covy has shot some of the biggest rodeo, bull riding, and racing events in North America, the boys chat with Covy about how he got his start and much more!

For the week of January 29th 2020, the “statcast”. Ted Stovin and Wacey Anderson chat with probullstats.com founder Slade Long. Slade has been gathering data on bulls and riders form past and present for years, his numbers and recorded outs have brought a whole new aspect to the bull riding world.

The episode you have all been waiting for, The Bachelor Season 2. Ted Stovin has lined up four eligible bachelorettes for our boy Wacey Anderson, will this be the year Wacey finds love or will we be back for Season 3 next year? Tune in to find out!

It’s Hockey, Hanna style. Ted Stovin and Wacey Anderson chat with Hanna Cowboy Hockey Tournament founders Lowell Johnston and Darren Jones along with Big Valley team members Dylan Houston and Kade Grant-Johansen. We may have lost the tournament but this episode was a ton of fun!

With one of the biggest announcements in recent rodeo history, the Calgary Stampede and PRCA signed a brand new multi-year partnership, for episode No. 60 Ted Stovin and Wacey Anderson sit down with Calgary Stampede Rodeo and Chuckwagon Manager Kynan Vine and PRCA Media Director Scott Kaniewski to discuss.

Amidst the Coronavirus pandemic Ted and Wacey go back to an interview with CFR Steer Wrestling qualifier and twitter comedian Chance Butterfield for Episode No. 61, the first quarantine pod and the first time the boys haven’t done the show both from HQ. Butterfield nearly died in a horse accident in High Prairie and tells us about the harrowing tale among other pursuits in his career.

You can listen below or by following any of the links in this post!

These are the first of many episodes. Our goal with the show is to further promote our western way of life, this time in a different setting. As per the name, there’s no bull shit in this show and we don’t hold anything back.

We hope you enjoy “Cowboy Sh*t” with Ted and Wacey. 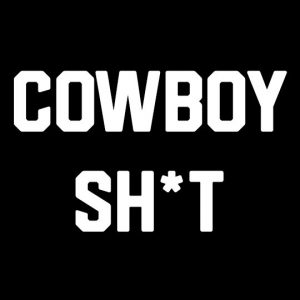 Featured post
Brett Gardiner – A Man of a Million Words 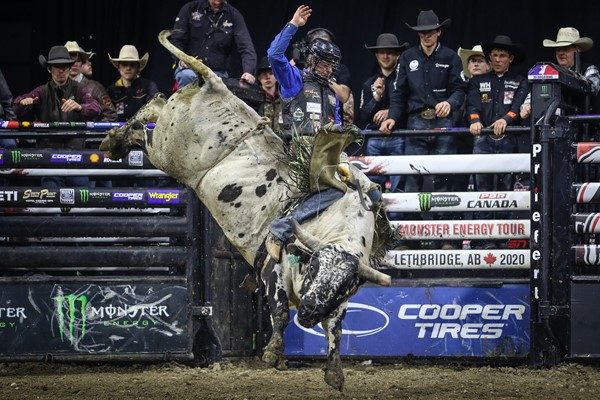