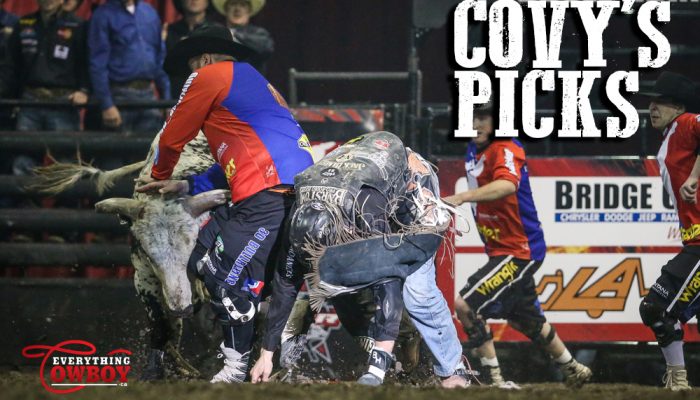 PBR Canada is back, and I am looking forward to 2017. My first off-season absolutely taught a lot of lessons on this sport, but getting back on the road is therapy in itself.

The first event of 2017 is sort of like the first event of the NASCAR season. I think it would be cool to compare the 3D Bullriding produced Lethbridge PBR to the Daytona 500. Everyone wants to get those first wins. Jordan Hansen took the win last night, and with the stock draw hitting the inbox this morning, it is my turn to take home the bragging rights. I’ll attempt to beat Ted Stovin’s 1/5 night last night.

My sincerest apologies go out to Zane Lambert. Chatting with the Ponoka cowboy last night, he admitted that he takes the pressure of “Ted’s Picks” seriously, and might need a week off from going under the Everything Cowboy spotlight. Sorry Zane, you got one of the best draws of the long go this weekend. Wild Hoggs bull-hand Jake Wilson says this is the pick of their long go pen, and should be out and to the right. Which will be right into Zane’s hand. If a guy can cover this bull, there is no reason that he can’t see 85-86 points and a contender for the round win.

Justin Lloyd vs. 185 Shot of Whiskey from Josh Barezay and 2Bit Bucking Bulls

I would say that Justin Lloyd has made the most miles out of any PBR Canada rider so far this year, and those couple runs down south haven’t been easy on him. He took a bit of a stomping a few weeks ago in Colorado, but has healed up and is back at it with a smile on. Tonight he has Shot of Whiskey from the 2Bit Nation, a bull that can be ridden as evident by Dakota Buttar, Zane Lambert, Brady Sims, Cody Coverchuk and Chase Outlaw who rode this bull last year. This isn’t a slight against the challenge Shot of Whiskey brings a rider, but if a guy can make the eight in the long round, those consistent 42-43 point bull scores are a perfect tune up for the short round.

Tim has a ton of goals in rodeo and bull riding as as time wears on for the tall Saskatchewan product, he is hitting his stride. Taking home $25,000 plus at last years CFR with a pair of round wins and finishing in the top 5 of the PBR Canada were on that list. 2017 has been tough on the “ole” shoulder for Tim, but his attitude is where it needs to be to get some bulls ridden here on the PBR Canada side of things. Case Closed is a great bull from the Outlaw Buckers that impressed me at Camrose last year, when Tanner Girletz was 86 on him. Like I mentioned above, his last two outs have seen 42-43 bull score, respectively, and that is what a guy wants to see for the long round. I think at the buzzer, Lipsett could be 85.5 on this bull.

Zac Peterson vs 68 Blue Print from the Girletz’s

I don’t know Zac as well as most of the riders on the PBR Canada roster, but what I do know is he has one heck of a challenge in a great bull raised by the Becker Family and picked up by Girletz Rodeo. Blue Print is one of my favourite bulls going. This grey-white spinner never seems to have an identical trip. Once you get him spinning those first two rounds, it seems like the strength of this little bull multiplies by ten. The more common trip will be two jumps out and to the left hard, and this play would be into Zac’s hand. I think a guy who covers this bull should find 86-87 and contend for the win in the long round. Just ask Garrett Green who took home top honours at the Chad Besplug Invitational after covering Blue Print in the long round.

This is a Calgary Stampede qualifying bulls, against a Canadian Champion, and last nights winner. Jordan Hansen can ride with the absolute best of them, but if this bull has a good trip he will test Hansen. The little red bull should be out one or two, around to the left for a couple rounds, then cut back right before the whistle. 2016 Calgary Stampede Champion Cody Teel was bucked off of this bull last year, and while he had a weird trip under Fabian Dueck in Saskatoon at the end of last season, Jake Wilson says his attitude at home has been spot on. He had a great trip, taking advantage of Nanton’s Ron Hunt in Abbotsford last year, Hunt adding that a guy just really needs to keep hustling to the front end of cover this bull. If Jordan Hansen keeps riding the way he has since claiming  that Canadian Championship this should be an 84-86 score and a ticket to another short go-round.