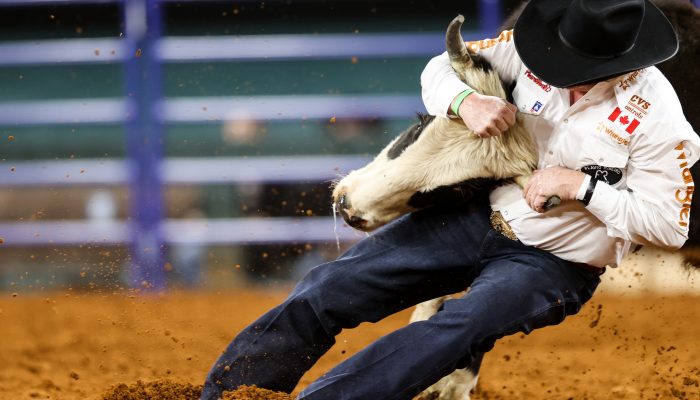 Cassidy Breaks the Ice in Round 2 of Wrangler NFR

CALGARY, Alberta — Canada got on the board in Round 2 of the Wrangler National Finals Rodeo in Arlington, Texas on Friday night at Globe Life Field.

Donalda, Alberta’s Curtis Cassidy broke the ice, stopping the clock in a time of 4.3 seconds for a split of fourth in the bulldogging worth 8,885 points towards the 2020 PRCA World Title. Coming into the finals fifth, Cassidy has now slipped to No. 8 while Matt Reeves remains No. 1 despite not placing yet in Texas.

.@curtiscassidy1 breaks the ice for Canada at the 2020 #WranglerNFR at Globe Life Field in Arlington, Texas. He stops the clock in a 4.3 for a split of fourth in Round 2.
Video courtesy @PRCA_ProRodeo pic.twitter.com/hTrdKnfj6Q

World Champ Tyler Waguespack and Montana’s Bridger Anderson split the win in Round 2 with matching 3.8’s.

Zeke Thurston and Orin Larsen both put a second score to their names but remained out of the money in Round 2. Cowboy Channels’ Butch Knowles thought Larsen might be awarded a re-ride but the judges thought otherwise. The 75.5 points were 11.5 points off the round win and 8.5 back of the money at No. 6. Minnesota’s Tanner Aus did win the round on a Canadian-raised bucking horse in Wilson Sanchez at 87 points. Larsen has slipped back from No. 3 to No. 5 in the world standings.

Thurston was 82.5 on a horse called Angel Fire, 2.5 points out of the money while Ryder Wright won the round, and the COWBOY SH*T highlight of the night on Feather Fluffer with a huge 90 point effort.

Both Levi Simpson and Kolton Schmidt did not register a time in the team roping. Other round winners included Marty Yates (7.2) in the tie-down roping, Jimmie Smith (17.04)  in the barrel racing and Stetson Wright (88.5 points) in the bull riding. Six-time and reining world champion Sage Kimzey has now slipped to third in the world standings.