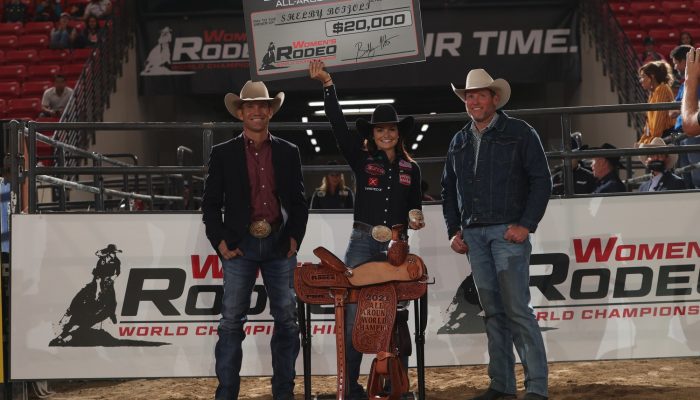 LAS VEGAS – Backed by a dominant showing, including the fastest time of the week, 2020 Women’s Rodeo World Championship (WRWC) Breakaway Roping World Champion Madison Outhier (Utopia, Texas) surged to the top of the leaderboard to win her second breakaway roping world championship on Friday evening at South Point Arena in Las Vegas. The 18-year-old became the first two-time champion in the event’s history.

Outhier delivered a groundbreaking performance at the event, as the string broke away from her saddle horn at an impressive 1.91-second time, topping Shelby Boisjoli’s 2.03-second run. The Texas Cowgirl is the only athlete to win the Prestigious World Championship and a WCRA Triple Crown of Rodeo event (Rodeo Corpus Christi) in the same year. Outhier also defeated 8X WPRA World Champion Lari Dee Guy’s 2.07-second time.

As the World Championship event continued on Friday evening, a hotly contested battle in the Team Roping began to unfurl. Mother-daughter duo Rylea (Stephenville, Texas) and Debbie Fabrizio(pueblo, Colorado) had fans inside Vegas’ Cowboy Central on the edge of their seat as they were first to run, earning a remarkable 6.65-second time. The Fabrizio’s time held onto the number one spot before 2020 WRWC World Champion Heeler Hope Thompson (Abilene, Texas) and Whitney Desalvo (Stephenville, TX) notched a valiant 6.28-second run. Lari Dee Guy and Jimmi Jo Montera (Greely, Colorado) backed into the box calm and collected and logged what would be a historic run for all female team ropers, with a 5.95-second effort. The pair took home $60,000 individually, a Jesse Jaymes Silversmith’s buckle and a Women’s Rodeo World Champion Title.

Shelby Boisjoli (Calgary, AB) earned the 2021 Women’s Rodeo World Champion All-Around Cowgirl title. She won a $20,000 bonus and a custom saddle donated by Coats Saddlery, after earning 1,494 points during the three-day event along with nearly $64,000 in additional prize money. The Canadian cowgirl, who has over $73,000 in career-earnings with the WCRA, made history in Green Bay, WI during the WCRA Title Town Stampede when she faced off against sister Makayla in the shootout round, where she captured the title and $50,000 in prize money.

WCRA and PBR have announced the 2022 Women’s Rodeo World championship event will be split between The Historic Cowtown Coliseum and Dickies Arena. The first three rounds of competition will be at Cowtown Coliseum May 16-17, with the final two rounds held at Dickies Arena in conjunction with PBR World Finals. 2022 Women’s Rodeo World Champions will again be crowned in the same arena as the PBR World Champion.

Please find all round results HERE.

Fans can relive the action of the Women’s Rodeo World Championship Main Event the on a CBS Television Network on Sunday, Oct. 31 at 3 p.m. ET.