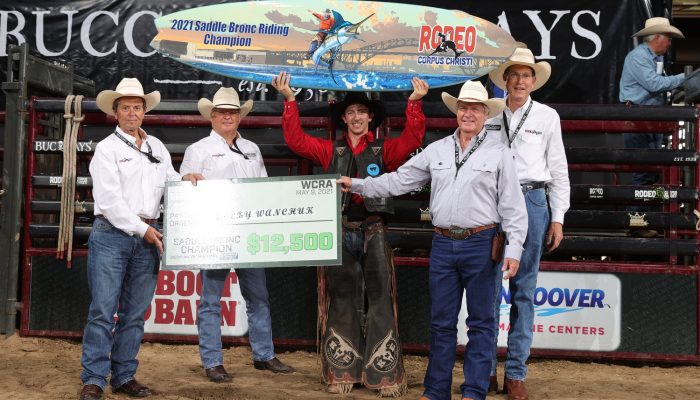 Riley Webb wins Rodeo Corpus Christi to put him in contention to be the youngest millionaire in the history of rodeo. Photo: Andy Watson / BullStockMedia.com

CORPUS CHRISTI, Texas – As the event was down to one eligible athlete in the Triple Crown of Rodeo (TCR) at May 9 Rodeo Corpus Christi, tie-down roping had the fans inside American Bank Center on the edge of their seats throughout the jaw-dropping run where Riley Webb (Decatur, Texas) Riley Webb prevailed. The 17-year-old Riley Webb was the undeniable star of the rodeo, delivering what would be the most groundbreaking performance of the event. As only one of two athletes remaining TCR eligible in the TCR round (short round), his 7.03-second effort elevated him to a $12,500 payday. For Webb, fresh off his win at August’s Stampede at the E, the event marked his second consecutive WCRA Major, putting him in contention to be the youngest millionaire in the history of rodeo. If Webb triumphs at July’s Days of ’47 Cowboy Games and Rodeo, he will be the first victor of WCRA Triple Crown of Rodeo $1 Million Bonus.

After Shorty Garrett (Dupree, South Dakota), Kolby Wanchuk (Sherwood Park, Alberta) and 2015 PRCA World Champion Jacobs Crawly advanced to the TRC Round with high 80+ scores, the trio quickly became immersed in a shootout for the $12,500 Major payday in the TCR round. Outscoring Garrett, the victor from the 2020 Stampede at The E who was seeking his second win in the Triple Crown, by 5.5 points, Wanchuk delivered a critical 87.5-point ride on Cash Deal to capture the victory.

Not only did Webb emerge victorious, but did so by defeating WCRA Windy City Roundup Champion, and the 2013 PRCA World Champion tie-down roper Shane Hanchey (Carmine, Texas) and JD Mccuistion (Collinsville, Texas). Webb received the quickest time in both May 9 rounds.

As the only team ropers to deliver a qualified run in the TCR round, Kaleb Driggers (Hoboken, Georgia) and Junior Nogueira (Lipan, Texas) delivered a 6.04-second run. Besting the No. 1 team on the Rodeo Corpus Christi Leaderboard and WCRA Champions Erich Rogers (Round Rock, Arizona) and Paden Bray (Stephenville, Texas) along with Clay Smith (Broken Bow, Oklahoma) and Jade Corkill (Stephenville, Texas).

In the bull riding, PBR (Professional Bull Riders) world No. 9 Derek Kolbaba (Walla Walla, Washington) rode supreme. Capping his perfect 2-for-2 effort on Sunday evening, the 2x WCRA Champion (2018 Days of ’47 Cowboy Games and Rodeo, WCRA Windy City Roundup) rode County Jail for a monstrous 91.5 points to net an equally impressive check for $16,500. Kolbaba logged the only qualified ride in bull riding, to land his third WCRA Champion Title. The win in Corpus Christi elevates Kolbaba to be one of the highest earners in WCRA with a total upwards of $160,000 in earnings since May of 2018.

Will Lummus (Byhalia, Mississippi) was unstoppable in the steer wrestling where he notched the only qualified time in the TCR round. The 3x NFR qualifier recorded a 3.54-second run in the long round, prior to delivering a lightning-fast 3.94-second effort in the TCR Round. The victory is Lummus’ first WCRA Major win. Lummus walked away with $16,500.

As the Sunday evening event continued, a hotly contested race in the breakaway roping began to unfurl. Women’s Rodeo World Champion (WRWC) Madison Outhier (Utopia, Texas), Titletown Stampede Champion Shelby Boisjoli (Stephenville, Texas), and WRWC All-Around Cowgirl Jackie Crawford (Stephenville, Texas) entered the TCR round edging each other’s showdown round times within the tenths of second. Calm and collected, Outhier remained poised as she backed into the roping box as she readied for what would be a career defining moment. Madison’s rope broke off from her saddle horn at an impressive 1.84-second time edging out Crawford’s 2.60-second time and Boisjoli’s penalized 6.67-second time.

On Sunday, June 6 fans will be able to tune into Rodeo Corpus Christi on a CBS network broadcast at 1:00 p.m. ET.

Nominations are now open for WCRA’s next Major rodeo- The Days of ’47 Cowboy Games and Rodeo taking place July 20-24 in Salt Lake City. Athletes are eligible to nominate their competitive efforts in the Virtual Rodeo Qualifier (VRQ) until June 27, 2021 to earn a spot in the $562,500 event.

All results from the event can be found here.