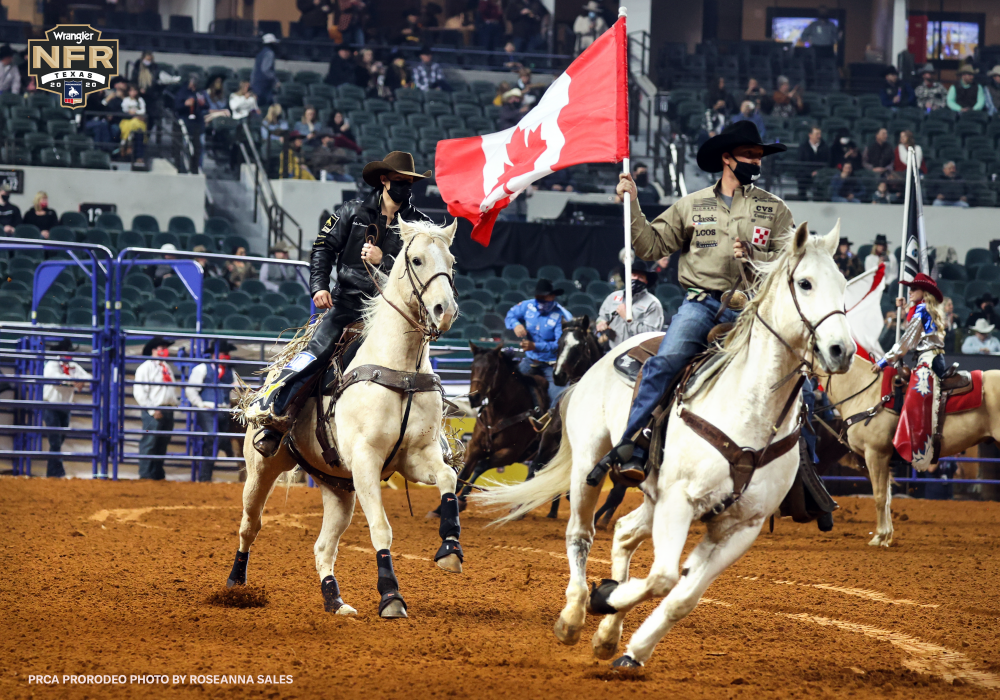 Canada Shut-out in Round 1 of 2020 Wrangler NFR

CALGARY, Alberta — All five Canadians to make the trip to the 2020 Wrangler National Finals Rodeo (WNFR) were blanked in Round 1 from Globe Life Field in Arlington, Texas on Thursday night.

On the bright side, Orin Larsen, Zeke Thurston and Levi Simpson did get on the board, keeping themselves in the aggregate. It’s only the first round, however with over 67,000 points on the line in that aggregate, it’s an important piece coming into next Saturday.

Larsen rode Scarlett Belle from Pickett Rodeo for 81.5 points but it was Richmond Champion winning the round with 87.5 points on Blessed Assurance of the J Bar J firm.

.@haileykaykinsel and her horse Sister dominated the standard pattern at Globe Life Field in Round 1 at the #WranglerNFR with a time of 17.18 closing the gap on No. 1 by 10,000 points. pic.twitter.com/lGV3Q2UkuV

For those that hadn’t heard yet, the 2020 WNFR won’t pay the full $10,000,000. The last article from back in September noted the finals would pay $6,000,000. Rather than having money confirm this year’s world champions, the same payout from last year is being used as the points system.

Reining World Champion Thurston would get a score of 81.5, even with a re-ride to go he won’t cash in. Currently Rusty Wright and Lefty Holman hold down the top spot at 86 points.

2016 World Champion Levi Simpson and heeler Shay Carroll stopped the clock in a time of 6.1 seconds, 4/10’s out of the money. Erich Rogers and Payden Bray won the round with a time of 4.8. Fellow Canadian Kolton Schmidt didn’t register a time.

Curtis Cassidy was the final Canadian out on Thursday, failing to get his steer on the ground for a time. It was a three-way tie on top between Dakota Eldridge, Jesse Brown and Blake Knowles at 3.9.

Two-time and reining World Champion Hailey Kinsel, second out on the ground stopped the clock at 17.18 for the round win, gaining just over 10,000 points on Brittany Pozzi-Tonozzi who finished the night third at 17.32.

Stetson Wright, the first World All-Around Champion from the roughstock events to win that world title since Ty Murray won Round 1 in the bull riding with 90.5 points on Silver Lining from Stockyards ProRodeo. Wright makes up ground on the No. 1 spot which is now held down by Australia’s Ky Hamilton who actually took over from Sage Kimzey by  almost 14,000 points thanks to a second-best 90 point ride on night one.

Round 2 of the 2020 Wrangler National Finals Rodeo from Globe Life Field in Arlington, Texas takes place on Friday, December 4th starting at 6:45CT.

For those watching in Canada, stream the event live at CowboyChannelPlus.com and stay tuned here every night for expanded coverage.