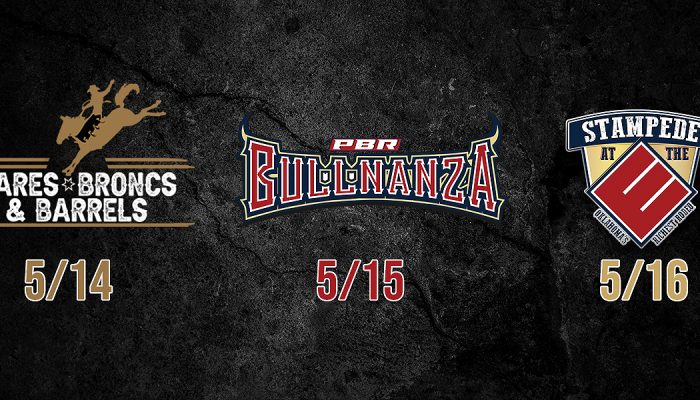 Tickets for the three-day Western sports extravaganza on Sale March 13 at 10 a.m. CT

GUTHRIE, Okla. – Oklahoma and the Lazy E Arena will make western sports history in May, when WCRA’s Stampede at The E – “Oklahoma’s Richest Rodeo” combines forces with the renowned Bullnanza.  The blockbuster western sports pairing will bring the Sooner State three days of edge-of-the-seat action from May 14-16 with more than $1.5 million up for grabs.

The event will be the second of four Major rodeos comprising the WCRA Triple Crown of Rodeo. Should the victor in any discipline at the Stampede At The E also take the top spot on the podium at the subsequent WCRA Majors during the past Royal City Roundup (February 28) and the two upcoming Days of ’47 Cowboy Games and Rodeo (July 21-25) and Puget Sound Showdown (August 28) the athlete will be eligible to win an additional $1 million bonus.

Prior to the one-day $1 million event, fans will be captivated for the first time in more than a decade the top 42 bull riders in the world as the elite bull riders of the PBR (Professional Bull Riders) takes over the historic Bullnanza on Friday, May 14.

During the most recent Bullnanza in 2009, four-time World Champion JB Mauney locked in the Bullnanza Championship.

Bullnanza begins with Round 1 at 8 p.m. CT on Friday, May 15. All 42 bull riders will get on one bull each in Round 1 while 14 will ride in Round 2. The riders’ individual two-round scores will be totaled with the average top score being the next Bullnanza Champion and earning a piece of the $55,000 purse.  The top nine from the event will advance to the May 16 Stampede at The E for another chance at $50,000 and an event title.

Tickets for all three events are now on sale and start at $25, taxes and fees may apply. They can be purchased at the Lazy E Box Office, online at ticketmaster.com, or by calling the Lazy E direct at (800) 745-3000.

Athletes from around the globe have the opportunity to compete in the WCRA Major Events Series and compete for the Triple Crown of Rodeo after earning points through the VRQ (Virtual Rodeo Qualifier). Qualifying for the Stampede at The E is currently underway, and athletes can continue nominating until April 12.

Since launching in May of 2018, the WCRA and its partners have awarded more than $7,300,000 in new money to rodeo athletes. All rodeo athletes interested in learning more about the WCRA or the VRQ should be directed to wcrarodeo.com.