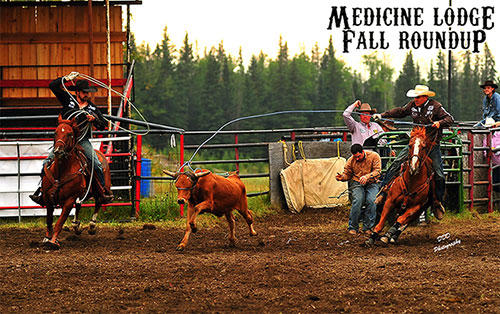 AIRDRIE, Alberta — Jeremy Buhler is very aware of the importance of the Grass Roots Rodeo Final.

“That’s what I’ve been focused on for the last month.” the 2016 World Champion Heeler remarked. Buhler and heading partner, Levi Simpson, took a step in the right direction with a win at this past weekend’s Medicine Lodge Fall Roundup, the second last qualifying stop leading to the September 27-28 Grass Roots Final in Calgary. “That was $789 that I really needed. I’d like it better if I was fighting for one of the top spots instead of one of those last Finals positions but I know what I have to do.”

For the 2017 Canadian Champions, Simpson and Buhler, the weekend win was another step en route to a rodeo Buhler sees as a potential game-changer.

“Anytime you have a chance to rope against ten guys with three cheques to be won (two go-round cheques and an average), that’s a really good deal,” Buhler noted. “I remember a couple of years ago, nobody was even talking about Kasper Roy for the CFR and he went to the Grass Roots Final, won three cheques and went on to the Canadian Finals that year.”

One of the advantages Buhler carries into these last few regular season rodeos is the fact that the man on the other side of the box is his four-year heading partner, Levi Simpson. Simpson, who has two Canadian titles of his own, and a share of that 2016 World title with Buhler, is more safely established in 10th place in the Canadian standings and 4th place on the Grass Roots leaderboard. In an event that sees a frequent turnover in partners, Buhler sees his long-standing association with Simpson as his ace in the hole. “It darn sure helps having him over there,” Buhler commented. “Both of us have been through slumps this season but when you’ve been roping together as long as we have, you know the dry spell is going to come to an end and that’s what has happened with us in the last few weeks.”

Buhler added that his preparation for the final weeks of the 2018 rodeo season won’t change. “Practicing is what I do everyday,” he stated. “I’m 30 years old and roping is my job. If I wasn’t doing this, I’d probably be in construction somewhere and getting up everyday and going to work. For me, this is exactly the same thing.”

It’s a nice problem to have. Curtis Cassidy has been winning so much and so often of late, it’s hard to keep track of his ever-increasing earnings totals.

“I’ve won about $20,000 in the last couple of weeks and I think that should put me in first place in the world steer wrestling standings.” Turns out Cassidy’s math was right on and updated PRCA standings have him exactly where he had calculated—in top spot with $103,000 plus won.

That total includes a whopping $18,000 haul at Puyallup, Washington’s Wrangler Pro Rodeo Tour Finale presented by Justin Boots. This win comes on the heels of a $10,000 Cinch Chute Out bonus cheque at Fort Madison, Iowa that doesn’t count in the world standings although a couple of thousand he won in the rodeo itself does count.

The irony in all this is that the two-event cowboy has some work to do on this side of the border in order to get to the CFR in the steer wrestling. Like Jeremy Buhler, Cassidy is counting on a big performance at the Grass Roots Final to help stake his claim to a steer wrestling spot in Red Deer. Cassidy is a little more comfortable in the Tie-Down Roping but is well aware of the challenge he is facing on the bulldogging side.

“The Grass Roots Final pays good and gives a guy a good chance to win at the end of the season,” Cassidy acknowledged. “It’s always my goal to get to the CFR in two events so I really need to get it done over these last few weeks and especially at Calgary.” The second generation talent is hoping to keep the streak going as he prepares for stops at Pendleton (Oregon) and the Oldstoberfest Rodeo (Olds, Alberta) this weekend.

This week’s CPRA action will be at the Olds, Alberta’s Oldstoberfest Rodeo, September 14 and 15.