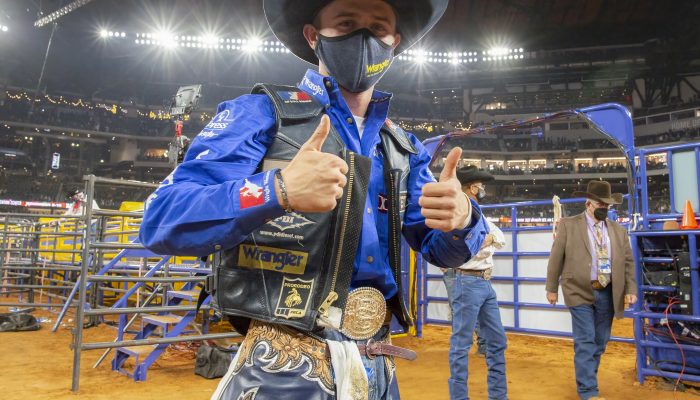 CALGARY, Alberta — On a night that saw one Canadian Pro Rodeo contestant earn a check in Round 5 of the 2020 Wrangler National Finals Rodeo (WNFR), Canadian bucking stock shined on Monday night.

The highlight for the Canadian stock being the 90-point effort by reining World Champion All-Around Cowboy Stetson Wright on Outlaw Buckers’ Brahma Boots Chrome. Judging is always a subjective topic and this ride could have absolutely won first place. Wright is third in the PRCA Standings, within a round win of first place Aussie Ky Hamilton.

.@StetsonWright7 with the huge 90-point ride on Canadian bucker Brahma Boots (@canadawestboots) Chrome puts him second in Round 5 in what I think should have been first on Monday night at the #WranglerNFR. Either way, this is the closest the bull riding has been in years. pic.twitter.com/2V2iY9spn8

The Round 5 win in the bull riding went to Colorado Cowboy Ty Wallace with a 91.5-point effort on Freddy Fender from Rafter G Rodeo. Wallace is just over 1,000 points behind No. 1 while Sage Kimzey was bucked off in Round 5 to sit No. 5, just under 53,000 points back. With 26,231 points on the line each night, anything is yet possible.

Stampede Warrior was the second Canadian animal to put a big score on the leaderboard in Round 5 with 89 points against 2019 WNFR aggregate champion Brody Cress in what some are saying could have also won the round.

Orin Larsen was in the same boat as Thurston, in a 82 points on Faded Night from Pickett Pro Rodeo. Also in the 0-for-5 truck was Kolton Schmidt who’s yet to even get a time.

Also in the team roping though, Levi Simpson and heeler Shay Carroll earned their third check of the week, this one for fifth outright and 6,769 points per man. The team roping was won by World Champs Clay Smith and Jade Corkill with a smoking 3.6.

The final Canadian to speak of tonight is Curtis Cassidy who had a rough time on the ground against his steer for a time of 15.0. Matt Reeves and Jace Melvin split the round with 3.9’s.

Hunter Herrin won the tie-down roping at 7.4 and Hailey Kinsel strikes again in the barrel racing at 16.92, the first time under 17 seconds this week. There’s only one round in ten that Kinsel hasn’t won yet at the  Wrangler NFR and that’s Round 2. But that’ll have to wait until 2021.