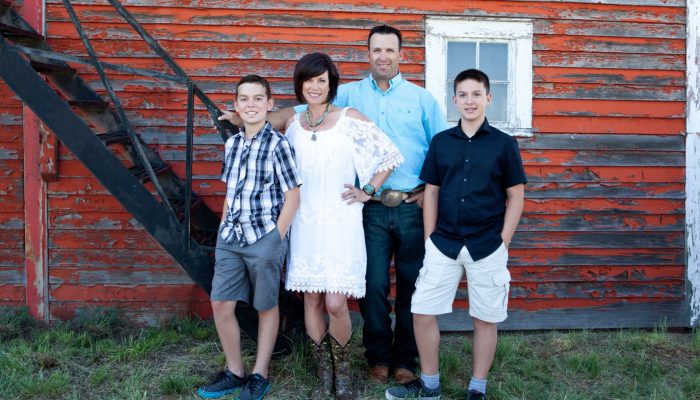 Lessons learned on the back of a horse have helped Tanya Ellis on a life-ride rougher than she ever could have imagined.

The former Alberta High School Rodeo Queen and barrel racer is battling Stage 4 colon cancer, at a time when she’d far rather be focusing on her two boys and her husband. But given no choice, she’s determined to use her situation to help educate others.

“I feel like my determination, and the foundation of who I am, was built on the back of a horse,” says Ellis, who’s just 42. “I was determined I was going to turn this calf roping horse into a barrel racing horse. That determination followed me all through my life. Now I feel like that same determination is making me want to beat this.”

Ellis grew up in the Medicine Hat area, with her dad Rocky Houff a pro calf roper, and brothers Travis and Troy also active in the timed event end of the rodeo arena. Tanya was a barrel racer herself, and competed at the National High School Rodeo Finals. Her husband, Tim, did all three timed events and was the CCA Rookie of the Year. But as their family came along, priorities changed, and rodeo was less a part of their regular routine.

Tanya had always wanted to teach, and her enthusiasm and passion for sharing knowledge made her a popular part of Neubauer Farms near Medicine Hat, where she worked as ‘Farmer Tanya’, teaching youngsters about farming and food. She also assisted teachers and was active in Seven Persons school, where her sons Tripp, 14, and Trigger, 12, are students.

While her heritage gave her a love for all things western, family genetics also passed along a dangerous link lurking beneath Tanya’s very healthy exterior. Knowing her grandfather and his two sisters died from colon cancer, she asked at her age 30 physical for a colonoscopy, and again at 40. Because she was the picture of good health, she was told she didn’t qualify. She trusted that judgement, and didn’t insist. When just a year later she was finally diagnosed with the killer disease, it was already at Stage 4. Since then, there’s been two emergency surgeries and five rounds of chemo, and she’s been told chemo every two weeks is all that can be done.

Given the likely prospect of just three years to live, Tanya Ellis wants to make every one of her 1,000 days count for her and her family. She also wants to be very open about her reality.

“My aunt passed away at the age of 22. I was only eight years old when that happened, and I knew she had cancer, but I didn’t really know what that meant. It wasn’t really talked about. I didn’t know she was dying. I thought she was just sick and in the hospital, and was going to get better. So when she actually passed away, I was absolutely devastated, because we were so close.”

Wanting to spare that shock affect for her family and friends, Ellis took to Facebook, making videos to keep everyone informed on her diagnosis, progress, treatments and challenges. Her latest one focuses on ‘what would you do if you only had a thousand days to live?’

“When we sat down with the boys, literally, my youngest was in tears. ‘A thousand days is not enough, Mom’ he said. You’re right, it’s not enough and that’s why I have to fight. I have to fight for my kids because I don’t want to leave them motherless.”

Involving her kids in the gut-wrenching discussions has led to some strengthening actions. A school project with her son Trigger’s class creating and selling t-shirts raised funds for several charities, and helped other students in the class who were also dealing with the effects of cancer’s clutches in their own families.

The whole family is part of the fourth video where Ellis uses her circumstances to teach others.

“I can’t help but want to educate people. I just want them to know, if this can happen to me … I’m physically active, I eat well. I think we assume it’s somebody who smokes or eats fast food and drinks pop all the time.”

“I did a little bit of research,” she explains. “The Canadian statistics in 2015 are ‘that one in two Canadians will develop cancer in their lifetime’, and I was absolutely blown away by that number. How do people not know this? It should be shouted from the rooftops so that you can be proactive.”

Today there are some new cancer treatments being developed, with many not yet available in Canada. Ellis worries skyrocketing costs to the Canadian medical system from such a high prevalence of the disease could limit patient choices.

“I don’t want this to happen to anyone else,” Ellis said.

The Ellis family is experiencing the financial hit. Tanya does have an appointment at the MD Anderson Cancer Center in Houston, which is renowned for its colon cancer work. She’s seeking a second opinion there, to see if there are any options other than chemo, to help in her fight. The appointment alone is costing $25,000 U.S., and potential treatment costs could be far beyond that.

“Looking at it as a parent, if that was my child (needing treatment), absolutely, we’ll do whatever it takes. But as a parent, I can’t do that to my family. I can’t leave my family bankrupt, and then not have me around. For maybe a five percent chance of living past my ‘expiry date’, so to speak, my 1,000 days, I can’t do that to my family. It’s so hard to be a Mom and make those decisions.”

A benefit called 1,000 Nights to Fight is being held at the Silver Buckle Sports Bar in Medicine Hat October 27th to help the Ellis family offset the costs of the Houston trip and possible further treatment. Tickets are $20, and the evening features live music from Mahoney, plus a live and silent auction and door prizes. Tickets are available through Eventbrite.ca