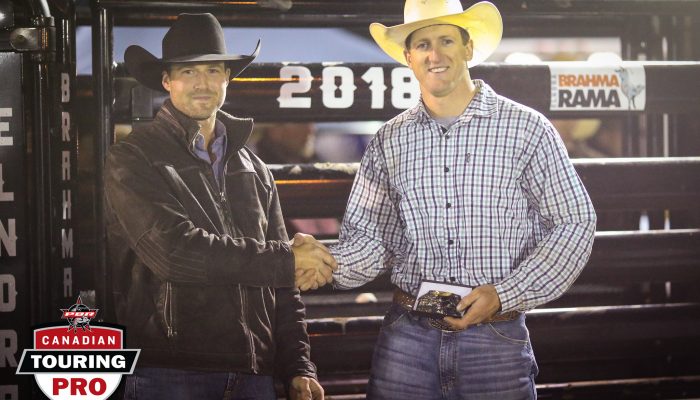 The victory, his third of the season across all levels of PBR competition, was backed by a Round 1-winning 85-point trip aboard Kool Aid (R Saga Ranch) in the pouring rain.

Paton notably sustained a torn right PCL in February 2017, which while it was supposed to sideline him for 12 weeks, kept him out of action until the most recent leg of the PBR Global Cup in Sydney, Australia in June.

Second went to rookie sensation Nick Tetz (Calgary, Alberta), netting him $4,533.33, 165 Canadian and 30 world points. The finish, his second Top 5 effort of the weekend, was a result of his 82-point ride on Tangled (R Saga Ranch) in Round 1.

After beginning the event ranked No. 9 in the national standings, his runner-up result propelled him to No. 6, surpassing Daylon Swearingen (Piffard, New York) for the lead in the race for the 2018 PBR Canada Rookie of the Year title.

Bull of the Night honors went to Spot On (Wilson Rodeo), a bull raised by event hosts Flying High Rodeo Co, bucking off Klayton Lakevold in Round 2.

The PBR Canada Touring Pro Division next travels to Coronation, Alberta and Coronation Arena for the Royal Rumbull on Wednesday, August 15. Action gets underway at 7:00 p.m. MT.