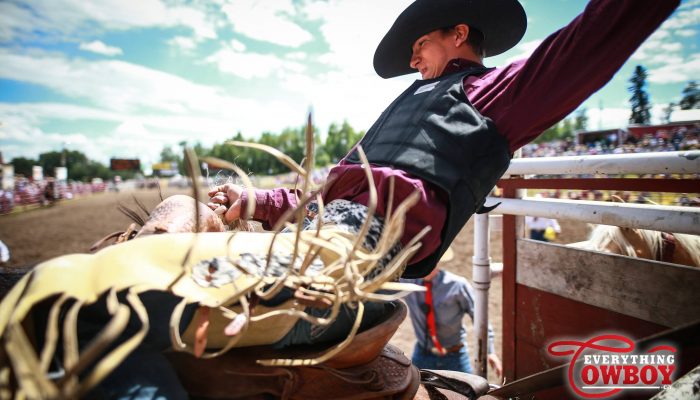 Ashbacher looks to CCA Finals and CFR in 2017

The 21-year-old Arrowwood product has decided to focus on a pair of finals for the 2017 season, the Canadian Finals Rodeo in Edmonton under the CPRA and the CCA Finals in Swift Current.

“After spending last year hitting as many associations as possible my goal narrowed for this year on two major finals. Those were the CFR and the CCA Finals,” said Ashbacher.

“Not only is my goal to make the finals but maybe come in as the season leader. This made those two associations my top priority. When trying to balance the two during the year I had to decide which rodeos could be made in a weekend to get to as many rodeos as possible. I have to do my best to work both but sometimes that does not always work out in which case it comes down to which rodeo gives me the opportunity to make more money.”

Ashbacher is also working on his pro card in the CPRA, which according to the young cowboy is a bit of a challenge in itself.

“As for the permit work, I try and cross enter with the open and the novice when I can and once in awhile if there is not another rodeo which counts to my standings on I will slide in a permit rodeo.”

Ashbacher has had a great season on the CCA side, taking a win, and splitting one. However he says he is simply trying to stay consistent everywhere he goes to ensure those berths at finals.

“My year has been pretty good in the CCA, I have placed pretty consistently at the rodeos that I have entered which is more that I can ask for. When I am trying to improve my riding I aim for consistency as well as seeing an improvement in my riding. I like to look at it in a way that I need to place on the horses that might not be the best in the pen and I need to capitalize when I get the opportunity to get on the really good ones,” said Ashbacher.

“I was 78 points on a good old horse of my dads in Coutts, Alberta to split the win of that rodeo and I was 80 points on an awesome horse in Eston, Saskatchewan to win that rodeo. Those wins along with a few other rodeos are what have allowed me to sit where I do in the standings thus far.”

Ashbacher told Everything Cowboy that having been one of the competitors who got to see the CCA Finals in both Regina and Swift Current, he was impressed with that first year in Swift Current coming from such an established event.

“I was lucky enough to be involved in the last CCA finals at Agribition in Regina as well as the first Finals in Swift Current. That gives me the opportunity to compare the two first hand,” said Ashbacher.

“Swift Current has had awesome support for rodeo and I was quite impressed with how the first finals was held there. With moving to any new venue you expect there to be kinks and hiccups that need to be ironed out. I could not believe how smoothly the whole finals was ran for its first year. It makes a guy excited for what is to come in the future when you see the first year go as well as it did in Swift Current.”

Despite his determination, Ashbacher know the season is long and the CCA has a ton of competition.

“It is not easy to make it to the CCA finals. It takes many miles of travel to lots of rodeos to get enough money won to be in the top twelve. The competition has been tough all year and that makes it even harder to get a cheque at any rodeo,” he said.

“A guy finds himself trying to get to two rodeos in one day or even more to give you that chance to make some money for the standings. There are some rodeos with big money up that are not close to home which adds to the cost to play which makes it important to capitalize on all your chances especially when the next guy is trying to do the same and take your spot in standings.”