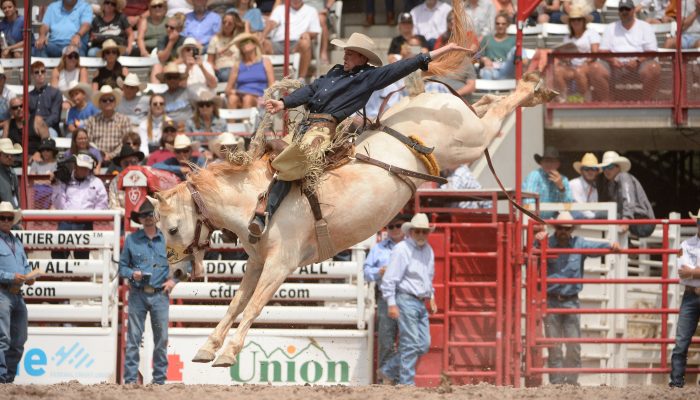 CHEYENNE, Wyo. (July 30, 2021) – On a day when a majority of the saddle bronc riders at the 125th Cheyenne Frontier Days Rodeo (CFD) scored 80-plus points, Ben Anderson managed to best them all.

The Rocky Mountain House, Alberta cowboy recorded an 88.5-point ride on the back of Championship Pro Rodeo’s Damaged Goods to win Friday’s CFD Semi Final round and propel himself into Sunday’s Championship Finals.

Of the nine saddle bronc riders who stayed on for eight seconds, six were 83 points or higher. Anderson held off Milford, Utah’s Stetson Wright (88 points) who put himself in position to be the first of his famous saddle bronc riding family to win a championship in that event since his father Cody Wright started competing here over 20 years ago.

This wasn’t the first time Anderson had been on the back of Damaged Goods as the two met at the Mandan (North Dakota) Rodeo Days earlier in July. Anderson hit the ground in less than two seconds, leading to his moment of revenge on Friday.

“I knew he was good. Actually, my travel partner, Layton Green, got on him the other day and had a really good trip with him. He was 85. He was good with me (the first time), just bucked me off really quick,” Anderson said. He also previously won a qualifying round by posting an 88 in the quarterfinals. “I saved it all for Cheyenne I guess.”

A similar pattern emerged in steer wrestling as five of the six qualifiers finished in under seven seconds, with Hallsville, Texas cowboy Justin Shaffer posting a time of 5.5 seconds.

In women’s breakaway roping, 10 of the 12 competitors recorded a time and everyone went for 6.1 seconds or less, making the race for the top six spots extremely narrow. Stephenville, Texas’ Kayelen Helton edged out Buffalo, South Dakota’s Sawyer Gilbert to win the day. Helton finished in 4.3 seconds, just ahead of Gilbert’s 4.6.

While tight scores among the top six competitors were the norm in most events, bull riding proved to be the exception as the pen turned out to be extremely difficult. Of the 13 cowboys to climb on, only four were able to last eight seconds. Still, it turned into a close competition as Grand Coulee, Washington’s Shane Proctor held off Randlett, Utah’s Josh Frost to win the day. Proctor, who won this rodeo in 2011, was at the top of the leaderboard with an 86.5-point ride on the back of Dakota Rodeo’s Big Red, while Frost was 86 on Stace Smith’s 637D.

The Semi Finals 2 will start at 12:45 p.m. on Saturday at Frontier Park. Six competitors in an event qualify for Championship Sunday from each Semi Final.

CHEYENNE, Wyo. (July 30, 2021) – The following are unofficial results from the Semi Finals One (seventh performance) at the Cheyenne Frontier Days Rodeo on Friday. All money winners advance to Sunday’s Championship Finals. Payoff subject to change.

*These events conclude on Saturday, July 31.