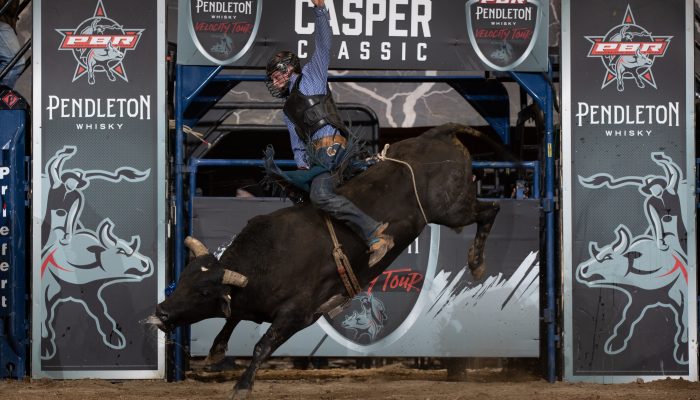 LAS VEGAS – Ahead of the 2019 PBR (Professional Bull Riders) Pendleton Whisky Velocity Tour Finals in Las Vegas on Nov. 2-3, Shay Marks (Sunnybrook, Alberta) has been selected as the Canadian representative set to compete at the season-culminating event for the league’s premier expansion series, opening the door for the Albertan to qualify for the first PBR World finals of his career.

Five crucial PBR World Finals berths are available at the Velocity Tour Finals, which will be awarded to the 2019 PBR Pendleton Whisky Velocity Tour Champion and runner-up, 2019 PBR Pendleton Whisky Velocity Tour Finals event winner and runner-up, and the top finishing international invite. Should any of these individuals already be qualified via the Top 35, the next rider in either the tour standings or event leaderboard will earn the berth to the most prestigious event in professional bull riding.

Marks will be joined by fellow international invites Lane Mellers (Australia), Leandro Machado (Brazil), and Francisco Garcia Torres (Mexico) at the “Championship before the Championship.”

Thus far in 2019, Marks, who is competing for the first time since undergoing reconstructive shoulder surgery in 2017, is having a banner year.

After winning his first event back from injury, dominating the season-launch Monster Energy Tour stop in Winnipeg, Manitoba, the 23-year-old has amassed an additional 11 Top-5 finishes on Canadian soil.

The 2019 season also included Marks’ first trip back to the Unleash the Beast after he made his debut in Billings, Montana in April 2014. He competed on the elite tour twice, making his first appearance at a Major in Nashville, and at the October event in Greensboro, North Carolina.

Marks will travel to Sin City ranked No. 3 in Canada and No. 47 in the world. In the Canadian national standings, he trails No. 1 Jared Parsonage by 452.49 points, and is 385 points outside of the Top 35 in the world standings.

No stranger to the Pendleton Whisky Velocity Tour Finals, Marks rode at the season-culminating event in 2015, also travelling to the event, then in Kentucky, as the No. 3-ranked rider in the nation.

Mellers and Machado will make their Las Vegas debut at the PWVT Finals.

The world’s Top 3 bull riders – No. 1 Jose Vitor Leme, No. 2 Jess Lockwood and No. 3 Chase Outlaw – will headline the PBR Pendleton Whisky Velocity Tour Finals at South Point Hotel & Casino, setting the table for one of the most fiercely contested World Championship races in PBR history.

In the razor-tight race to be crowned the 2019 Pendleton Whisky Velocity Tour Champion, the Top 12 ranked riders are separated by fewer than 440 points, with 10 poised to ride inside South Point Hotel and Casino. In addition to leading the world, Leme also sits atop the PWVT standings, 202.5 points in front of No. 2 Taylor Toves, who gained significant ground following his victory in Rapid City, South Dakota at the final regular-season event of the year.

In the broader PBR World Championship race, No. 1 Leme leads No. 2 Lockwood by a slim 496.66 points and is 1,495.83 points in front of No. 3 Outlaw. One rider has the chance to win 440 world points at the Velocity Tour Finals: 80 points are awarded to the winner in each of the three rounds, and 200 points to the event winner.

Leme, Lockwood and Outlaw each have had their career moments in the expansion series’ season-culminating event.

Leme catapulted to stardom following his performance at the Velocity Tour Finals in 2017.  Earning an invite to the event as the season’s PBR Brazil Champion, Leme went 3-for-4 to finish eighth, qualifying for the PBR World Finals as the top-finishing international invite. Once inside T-Mobile Arena, he went a flawless 6-for-6, becoming the fifth rider since 2000 to be perfect at the World Finals. In winning the most prestigious event in bull riding, Leme rose to No. 7 in the world and captured Rookie of the Year honors. Leme has since been a mainstay on the elite Unleash The Beast, finishing No. 2 in the world in 2018.

World No. 2 Lockwood will compete at the 2019 PWVT Finals as the 2019 Touring Pro Division Champion, concluding the season 52.5 points in front of Joao Ricardo Vieira after earning four event wins, along with five additional Top-10 results.

Mounting an incredible 3-for-4 performance to finish fourth, Lockwood garnered 227.5 points, rising to No. 4 in the world, inching within 467.5 points of the top spot. Following a 3-for-6 performance inside T-Mobile Arena, which included a historic three consecutive round wins, Lockwood became the youngest PBR World Champion in league history, edging Kolbaba by a slim 447.5 points.

Last season, Outlaw, who won the PWVT Championship in 2016, became the first rider to win the PWVT Finals in multiple seasons. His 2-for-3 effort inside South Point Arena garnered a massive 320 world points and was part of a broader awe-inspiring second-half surge following a near career-ending injury at Cheyenne Frontier Days in July 2018 that propelled the Arkansas man to No. 22 in the world and his seventh consecutive PBR World Finals qualification.

In addition to featuring the top contenders for the year’s PBR World Championship, the draw will also include seven of the Top 10 riders locked in a feverish battle to be crowned the PBR Rookie of the Year. The contingent is led by world No. 10 Daylon Swearingen (Piffard, New York), who is currently second in the race amongst first-year pros, trailing leader Dalton Kasel (Muleshoe, Texas) by 410.41 points.

The field of competitors inside South Point Arena will also feature two-time PBR World Champion J.B. Mauney, who currently finds himself on the bubble of qualifying for his fourteenth consecutive PBR World Finals. Battling countless injuries throughout the year, including rib fractures and a broken left leg (fibula), Mauney is currently in unfamiliar waters, ranked No. 30 in the world.

Apart for the various fiercely contended races set to be impacted by the 2019 PBR Pendleton Whisky Velocity Tour Finals, the event will feature a familial flare. Two pairs of brothers, Jess and Jake Lockwood, in addition to twins Alisson and Alan de Souza, will ride alongside cousins Ezekiel and Ouncie Mitchell.

Each rider will attempt one bull per night Saturday and Sunday. Scores from the rides will then be combined, and the Top 10 riders will advance to the championship round following the completion of Round 2 on Sunday, Nov. 3.

The qualifiers for this year’s PWVT Finals at South Point Arena are:

PBR also revealed the PWVT Finals bullfighters. The fearless men on the dirt slated to protect the bull riders during each 8-second ride or wreck are:Cody Webster, Lucas Teodoro and Cooper Waln.

The action-packed weekend at South Point will include both ABBI Derby and Classic bulls. The bull pen consists of 48 ABBI Derby bulls – all 3-year-olds – and 48 ABBI Classic competitors. The Derby bulls are athletes just beginning their careers with a bull rider on their backs. This is the first step taken with these bucking bulls to get them ready to perform at future PBR events.

The Classic competition is the ABBI’s Wild Card event, which is a last-ditch effort for bulls who aren’t already qualified for the Classic World Finals. These are 3- and 4-year-old bulls who weren’t quite ready to compete earlier in the year and haven’t been to many events. Up to five of these bulls in this competition can win their way into the Classic Finals first round and appear in Round 1 of the PBR World Finals on Wednesday, Nov. 6.

For more information on the PWVT Finals Nov. 2-3 at the South Point Hotel & Casino or the PBR: World Finals Nov. 6-10 at T-Mobile Arena, please visit www.pbrworldfinals.com.

About the PBR (Professional Bull Riders):

PBR is the world’s premier bull riding organization. More than 700 bull riders compete in more than 200 events annually across the televised PBR Unleash the Beast, which features the top 35 bull riders in the world; the PBR Pendleton Whisky Velocity Tour (PWVT); the PBR Touring Pro Division (TPD); and the PBR’s international circuits in Australia, Brazil, Canada and Mexico. PBR’s digital assets include RidePass, which is home to Western sports. PBR is a subsidiary of Endeavor, a global entertainment, sports and content company. For more information, visit PBR.com, or follow on Facebook at Facebook.com/PBR, Twitter at Twitter.com/PBR, and YouTube at YouTube.com/PBR.