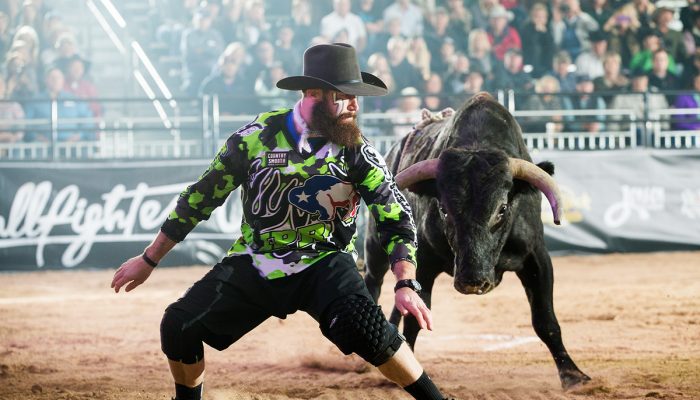 Action is heading to Moose Jaw

PBR and Bullfighters Only bringing a big show to Saskatchewan

MOOSE JAW, Saskatchewan – This city of 33,000 people has quickly learned how exciting things get with the bull riding event comes to town.

The action explodes even more for this year’s Professional Bull Riders Moose Jaw Powered by Young’s Equipment, set for 7 p.m.Friday, June 2, and Saturday, June 3, at Mosaic Place in Moose Jaw.

In addition to the raw power that comes with the PBR, Alpha Bull is adding even more to the two-day show with the inclusion of Bullfighters Only, the premier freestyle bullfighting association in North America.

“We’re excited to bring Bullfighters Only to Moose Jaw,” said Chad Besplug, a two-time Canadian champion bull rider that owns Alpha Bull, which is producing the event. “These guys are crazy athletic and can do some amazing things with these fighting bulls. They can be a show all by themselves, but they are just part of what we’re producing in Moose Jaw.”

Similar to Spanish bullfighting, the animals are bred to be aggressive and will pressure the bullfighter, who uses only his athleticism and his experience as his weapons and his tools to remain out of harm’s way.

“Freestyle bullfighting is still pretty new in Canada, but it’s a whole different avenue for fans,” said Weston Rutkowski, the reigning Bullfighters Only world champion who is scheduled to be part of the bouts in Moose Jaw. “It brings a whole different excitement to the events.

“Chad puts on great events, and they’re very entertaining from the get-go.”

Rutkowski saw it first-hand earlier this year when he competed at a similar event in Claresholm, Alberta.

“The crowd didn’t know what they were watching at first, but after Daryl got hooked down, they knew how exciting it was going to be,” Rutkowski said of Daryl Thiessen, a Canadian-bred bullfighter from Elm Creek, Manitoba. “They realized it was the game, and they really seemed to be part of the game from that point on.”

Fans in Moose Jaw should expect the same type of excitement, if not more. The event will feature many of the top bull riders in the game, including Wesley Silcox, the 2007 world champion in the Professional Rodeo Cowboys Association.

“This is really going to be some of the best Canadian bull riders we have and a few of the best Americans,” Besplug said. “I expect it to be a really tight competition.”

He should. The excitement of both bull riding and freestyle bullfighting is the unknown and the danger of dealing with the wild animals. Bull riders will try to remain on the animal for a qualifying eight seconds while exhibiting control. It takes a true athlete to make the whistle while riding nearly a ton of bucking, spinning and kicking muscle.

It’s the perfect mix of action-packed drama and pure athleticism.

“There’s always a chance to see some big-time wrecks,” Rutkowski said. “That’s the good thing about events like this, because you get the top-quality guys. You’re going to have to step up out there and risk it all in order to win.”